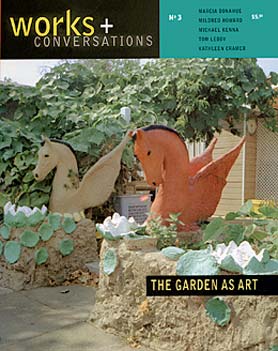 And if someone turns a garden into something besides being a garden, what is it then? We talk with artist/gardener extraordinaire, Marcia Donahue, in her famous garden in Berkeley. It's art and also full of art. Time there can change an unsuspecting visitor's life. "I'm a permission giver," she says. Artist Mildred Howard tells about her work as director of the Alice Waters Edible Garden at Martin Luther King Middle School in Berkeley, about her bottle gardens and the gardens of her childhood days. We have Andy Cao's glass garden in LA, Lotusland in Santa Barbara and Cevan Forristt's over-the-top garden in San Jose.

The Garden As Art

from the editor, Richard Whittaker

Tom Leddy: A Philosophical Conversation
The Garden As Art

conversation with Mildred Howard:
This Larger Thing in the World

What Do Gardens Mean?
-Richard Whittaker

An LA garden of White Figures


"To be an artist is not a matter of making paintings or objects at all. What we are really dealing with is our state of consciousness and the shape of our perception... The act of art is a tool for extended consciousness." --Robert Irwin

Why are the arts so often considered frills when it comes to what is needed in schools, in politics, in so many parts of life? The capacity for creative response is needed in all walks of life. In this issue we explore art as a tool for social engagement. Read More

It's been my good fortune to have more than my share of remarkable friends, and several of them appear in this issue of the newsletter. One of the joys of having a venue like this newsletter is that its a vehicle for expanding my own circle. Read More