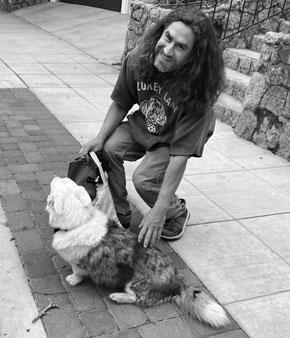 Issue #40 marks 30 years since w&c’s predecessor, The Secret Alameda, appeared. TSA was reborn in March of 1998, as works & conversations. And reaching our fortieth issue calls for some reflection.
Searching the Internet for an early review of w&c in the Jung Library Journal, I ran across one I hadn’t seen. On the University of Chicago Press Journal's website, a 2003 review appears that was published in Art Documentation: Journal of the Art Libraries Society of North America. In the review Laura Schwartz wrote, “You are probably asking yourself what makes works & conversations different from the more established titles such as Interview or Bomb?… It is different,” she writes approvingly, quoting our interview with Viola Frey in issue #4 and alluding to the inclusion, not only of artists who have gained wide recognition, but others who haven’t. She liked the idea behind w&c—the attempt “to fill a void and create a magazine to provide a venue for the voice of the artist.” She had one caveat: “The publication is too much Whittaker.”
In my defense, I have to say my intention was never about creating just another art magazine. It was about making a place for a point of view that had been forgotten—or, one could say, had fallen out of fashion, been discredited. In metaphorical terms, the vertical axis of experience seemed to have become an orphan. And yet, how deep that dimension goes in the history of art and artmaking—and it has not gone away.
Further, and quoting a friend (UC Berkeley professor Americ Azevedo, now passed on), “The truth demands to be lived.” I couldn’t just turn my back on the ineffable joy I’d experienced over and over in my encounters with beauty—gifts in the realm of being and meaning. Did other artists have similar experiences?
In short, the magazine is the result of this question —along with another. Could I make a space for bringing some part of such essential elements to others in a way that could make them felt? And with neither recognition myself, nor the money to hire like-minded talent for producing a new magazine, I ended up being mostly a staff of one. But not entirely. Here are some who have been of great significance for this effort: artists Jane Rosen and Enrique Martinez Celaya, journalist Paul Van Slambrouck, Nipun Mehta of servicespace.org, Barbara Sargent of Kalliopeia, Ann Hatch, Leeland Larson, Danny Hobson, John Friedman, Dickson Schneider, Robbin Henderson and Suzanne Tan. There are many more. Going forward, it’s likely I’ll include more of my own writing and photography while continuing to include interviews with, and the work of, others.
My encounter with and interview of Bouthina “Bebe” Barrett gave rise to making our theme for this issue “seen and unseen.” It serves very well for the content in this issue and could not be more apt for looking back over the past thirty years. The truth is, as a lens, “seen and unseen” speaks to all of life and brings a related theme to mind—“enough, not enough.”  At one point, I asked a few artists “What is enough?” The question came up in my conversation with artist Ann Weber [w&c #34].
I imagine a lot of artists ask themselves, “How much recognition is enough?” Being seen, in the sense of being recognized, is a fundamental need as was put so well by Gregory Bateson: “It takes two to make one.” It’s a question I’ve asked myself. And while the magazine has never reached a broad audience, there has been more than enough recognition over the years to keep the wellspring open.
Just as the seen is endless, so is the unseen—perhaps more so. Most of the themes we’ve proposed over the years are ways of pondering the seen and the unseen. Here are some of them: “dwelling,” “visible/invisible,” “the veil,” “this incredible fact of being alive,” “odyssey,” “turning points,” “towards inaccessible places,” “body and spirit,” “warnings and prayers,” “the action of light,” “hidden nature,” “unscripted journeys,” “borderlands,” “flowers from the sky,” “a place to stand,” “the gift,” “a geometry of the heart,” and “beyond words.”
Besides providing one possible lens for thinking about the content in each issue, a theme can help frame one of those generative questions we need—while answers, even when beneficial, close the doors. In a few words, publishing works & conversations has been a vehicle for crossing a boundary between the known and the unknown. It’s been a journey of great richness and I hope some of what I’ve found has been brought successfully to readers.
It’s a delight to have interviews with old friends John Toki and Sandy Simon in this issue, and serendipitous that potter and writer Rob Barnard has contributed an essay from his new book, A Search for Relevance. It adds depth and substance to our theme and harmonizes beautifully with what Toki and Simon share in our conversations.
We thank contributing editor Pavi Mehta for the introduction to Peter Veilleux. It might be that his masterpiece is the creation of East Bay Wilds, a nursery in East Oakland dedicated to California native plants, but in reading our conversation, you’ll see it’s just part of his own wild and fascinating story.
And ever since the pandemic began, I’ve found myself walking much more. It’s surprising how little effort is required to get out of the known territory. It’s as if foreign travel, with all its new impressions, is just a few blocks away. Included are some of my photographs and reflections from these walks. And the unique adventure of Indigo Animal continues. Where else could you find anything like it?
Welcome to issue #40.— Richard Whittaker