Non-Linear Encounters and the Deeper Life Looking out my window, I attempt to finish an inadequate story to describe this man full of so many stories, a life of fullness and quiet joy. The towering green beings outside wave long branches toward me as if they have much to say. But they are so quiet, and so slow. It would take me decades living with them to hear their stories and learn their lessons. I no longer have time to live in and among the trees to study their slow messages. Mel did slow his life, living with these royal sentries, listening and watching, learning gratitude from their outstretched arms, practicing to be a gentle, observing and deliberate witness.
“Stories are really helpful,” Mel continues to whisper through the swaying pines, firs and aspen of North Idaho. We never know where we will land, whom we will meet, and what stories will transform us. Mel was able to translate tree lessons for me. Tree stories became his stories, given for me to tell. 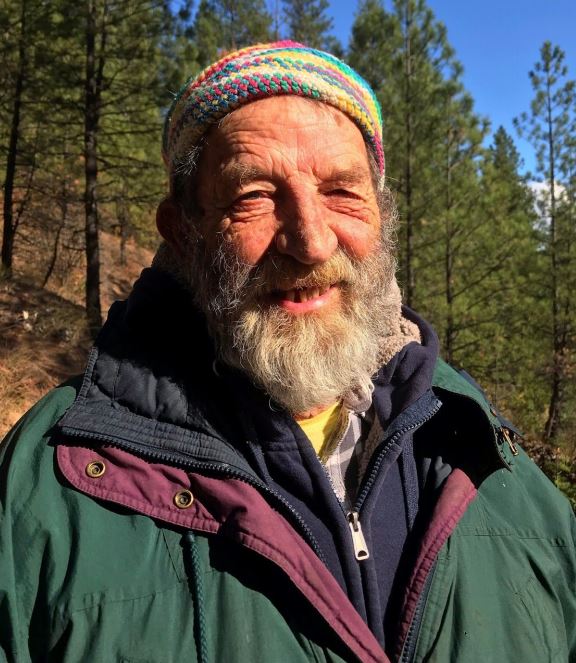 Susan Schaller's car accident at age 17 led her to studying American Sign Language (ASL), changing her life. ASL led her to a languageless deaf man who detoured her into writing a book, A Man Without Words, which led her to giving up the illusion of planning. Currently life unfolds page by page as she works on a book, The Fifth Town Crier - A History of Metallurgy, Alchemy, Bells, Town Crying and Me. She lives in N. Idaho after almost becoming a Covid-19 refugee in Germany (March, 2020) while conducting research for the Fifth Town Crier.

He's my Dad! What a beautifully written story. Thank you so much for taking the time to share him. And such a blessing to me to be able to see what others saw in him. I believe he is the sweetest man I've ever known, despite the struggles.

The beauty of this story is the beneath-the-skin kind, where beautiful souls reside, whose lives sometimes intersect with the lives of some of the fortunate ones amongst us. His photo tells tales of a rugged individual who has seen many untold ways of the walks in life, which seasoned and enriched his experience to create a rare blend of keen appreciation for the values of good living, hard work, the deep lessons of the world of nature, and the golden treasures of story telling and receiving!

Beautiful, surprising story! And a wonderful human being, one can see it through the picture without knowing him.

Very nicely done. You've conveyed the lasting essence of the man I knew. His wisdom came from experience,struggle and surrender,and finally love. I especially like the picture, thank you.

A Man Impossible to Classify One of my first experiences in San Francisco was of being ... Read More 746681 views

Say Grace I am deeply delighted to live on a planet that is so big and varied that I can ... Read More 11793 views

Cotton and Silk Vorbeck quilt, detail I’m working on the last panel of a pair of ... Read More 13281 views

A Conversation with Silas Hagerty I met Silas, a young man in his twenties from New England, at a ... Read More 80206 views

A Man Impossible to Classify One of my first experiences in San Francisco was of being ... Read More 746681 views

Interview with Bill Douglass - Jimbo's Bop City and Other Tales At the time I'd first gotten to know the widely respected ... Read More 369264 views

Greeting the Light It was thanks to artist Walter Gabrielson that I was able to get ... Read More 312686 views