In 1996 I published one issue of Deus Ex Machina. With our original title, The Secret Alameda, locals often assumed the magazine was about hidden restaurants, shopping tips and the like. Finally I abandoned it and came up with what I thought was a great alternative. But when I saw the expression on people's faces as they tried to pronounce Deus Ex Machina I realized my mistake. Only one issue exists, but it was quite special. Part of what made it special was the two-page spread featuring the work of Paul Reynard. I asked Paul if he'd write something to go with the two drawings we published. He gave me an eloquent hand-written page reproduced in the small image thumbnail. It reads:

The image as emotional imprint, as a signature. On the paper light shines out of the graphite's shade; the imaginative drive draws out the Dream like silhouettes emerging on a feeling wall. In the meandering movements of the hand bygone impressions are remembered. Emotion surges through the grid of crosshatched strokes unveiling a New Reality, a new Language.

Paul taught at the School for Visual Arts, but had no interest in competing to make headway in the art world. Nevertheless, he produced a sublime body of work. In an interview, artist Jane Rosen (who also taught at SVA) reflects about her close relationship with Paul. A superb book (Dancing Camel Editions) of his work was published by Nancy Larson with help from Knowle Hanson. Reynard consulted on the project during the last years of his life.  - Richard Whittaker 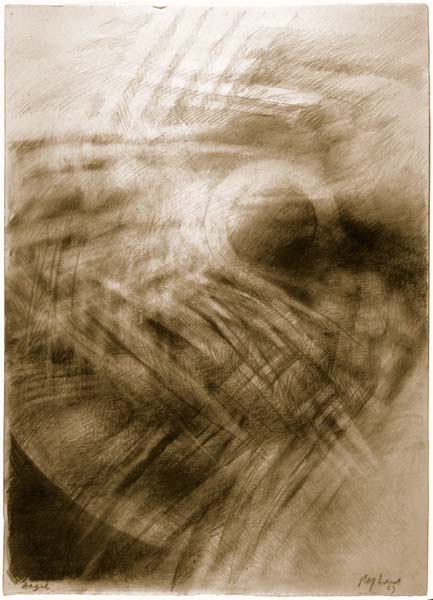 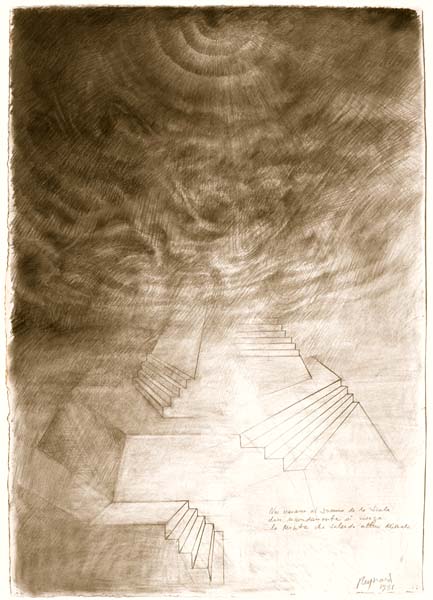 Paul Reynard was born in France and studied with Fernand Léger. He later lived in NYC where he taught at the School for Visual Arts and was a senior figure in the Gurdjieff Foundation of New York.

"the mind resembles the moon on the water"
I am holding an original copy; I picked it up on Telegraph Ave 1996, when I had hair. i still have hair and nobody cares

The reality within emerges via language sometimes necessarily stolen, as the message aches to have a voice. I am reminded here, I should have given the artist in you more in life and will continute to try in the forever through the artist in me.