Gale Wagner is one of the founders of the Pacific Rim Sculptors Group. His many large steel sculptures, such as the potted plant outside his Oakland studio, are familiar to many Bay Area residents.
I took this photo in 1992 when I did an interview - missing here - with Gale and Luigi Testa. Luigi and Gale were there before it became an official group.
As Luigi said about the Pacific Rim Sculptors Group, "Gale was an embryonic force behind it."
Gale explained, "About three years ago we had that East Bay metal sculptors tour though the San Francisco Museum thanks to Margie Boyd. At the conclusion of the day, after all these people by the busload had visited our different studios, we had a wonderful dinner at Lou's [Luigi]. We had a great evening and after that, we just continued getting together every few weeks. That's how it began."
Luigi added, "From the beginning there was sharing. We all worked at each other's studios helping each other. If we could do this as a group, it just seemed to make sense. Why not put this forth together?" 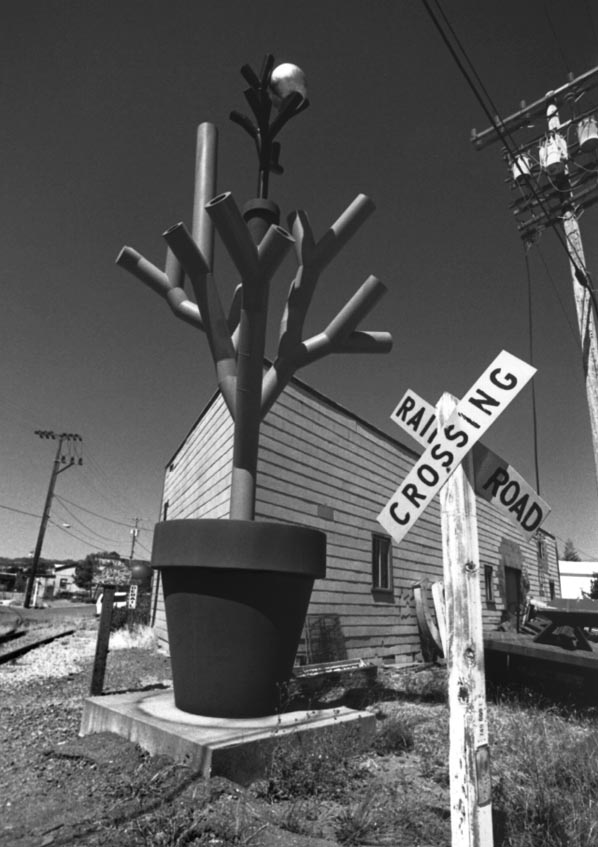 Wagner's studio on the Oakland Embarcadero with one of
his large steel sculptures.

I am Gale's ancient mariner and I have taken him by the hand. We are blood brothers and I have slain the albatross for him and Rolf Westphal and all our KCAI ahipmates which is why I could take Paul Slepak out of his strapped-in prison and set him free! Just keep in mind, buddy in our gunsights out of old My Lai, we are all, each everlasting one of us forever spermatozoa in the genomic truth of the microbiome!