I received my first Amateur Radio licenses in January of 1991 at the age of 49.

As a kid in the mid-west I had a radio shack in the wash house, an outbuilding where the women folk did laundry; it was filled with old Atwater-Kents, Philcos, Crosleys and whatever else I found in the junk yards. I'd go there at night and sneak cigarettes. I could bring in WSN in Nashville, Tennessee, XERF Del Rio, Texas and other far off stations.

I could bring in some DX (foreign stations) on 41 meters and some hams on 40. The aerial was a run of wire I thumb-tacked to the peak of the house roof some 20 feet away and about 16 feet high. The ground was a ten-penny nail stuck in the dirt behind the wash house.

We lived on the wrong side of the tracks, the side where the soot from the coal burning locomotives blew and where the poor folks lived. Us kids would talk to the CB&Q yards (Chicago, Burlington and Quincy Railroad) and listen to the old guys sending code. They could hold a regular conversation while the telegraph beat out messages on a Prince Albert Can and, when necessary, would jump back to the key without missing a beat. They told us kids about "whistle talk"—the meanings behind what the trains were saying as they whined and whistled through the night.

We could tell when old Number 8 was passing through town, the Creole, and we knew the moans of the Panama Limited, the City of Miami and New Orleans as they blew across the prairie towards places that we would never see. But, being children, perhaps we saw them more clearly than anybody. The old guys gave us weak, retired switchman's lantern batteries and taught us how to make telegraphs out of nails wrapped in wire and pieces of tin snipped out of old soup cans. They showed us how to make series and parallel circuits—the battery tester was our tongues; when they burned we knew we had enough juice!

At the library I read about grounds and antennas. I found a run of copper pipe in the junk yard and came home and drove it down into the dirt almost three feet; I retired the ten penny nail and replaced the skimpy little wire I had on it with an automobile battery strap— another junk yard find. Reception improved dramatically.

I didn't know exactly what to do about the antenna. There were no covenants and restrictions, but I dared not stir up ma or grandma. They indulged my curiosity to the point where the wash house was now more than fifty percent radio shack. You can argue at law with some success, but ask any judge you know and he'll tell you - don't mess with mom or grandma.

One early evening, me and Jerry Smith got back to my place from fishing; we dropped our cane poles on the ground and went into the wash house. The women were gone, so I moved the old russet colored couch out from the wall and produced a near half-pack of Camels. Jerry and I each took one and moved the couch back.

Sitting there, smoking, listening to some penny whistle station in Paducah, Kentucky fade in and out, Jerry said, "you know, aerials are supposed to be up high. I read that in a book."

"Well I can't get no higher than the house. That’s as high as there is high around here."

We went outside and examined the terrain. Picking up his fishing pole, Jerry pointed at the old box elder in the north yard. We didn't have enough wire for that run. But the fishing pole was inspiration itself, and two fishing poles taped together would be even higher. We scrambled up the roof and untacked the aerial and somehow rigged a two-fishing pole mast above the sixteen-foot roof. It wasn't pretty, but it was almost dark and we could take it down in seconds if we had to.

Back on the ground, Jerry made another suggestion. "The book said grounds work better in moist, salinated soil."

"Yeah, that's what I mean." Moments later we had poured a box of Morton's salt around the ground rod and stood there, hunchbacked, peeing over it.

Now just how much all of this owes to science I cannot say, but that evening Jerry Smith and I heard stations from Oklahoma City to Denver to Cincinatti (as I suppose you know, the correct pronunciation is "Sinssinata"). In weeks that followed we would move the aerial just to see what effect it had.

A lot of kids in our scout troop studied for their ham radio novice ticket. Understand, this was the Internet of the fifties, the cutting edge! I learned Morse code without too much trouble and made up tunes with it on our old piano after hearing Beethoven sending the letter V". (dah-dah-dah-DAH!). The rest of the exam was too daunting - the math, the necessity to draw schematics and antenna theory.

It was at the piano that I learned about the frequency of vibrations. For example, the note A vibrates at 440 cycles/Hertz. I followed the audio frequencies until they disappeared into the radio frequencies, kilohertz, megahertz—something always reaching upwards.

That's how I got interested in radio. I still fool around with aerials, but its been decades since I've peed on a ground rod! Years passed. Interests and demands changed. I all but forgot about radio.

Then, at 48 years old I found an old CB at Goodwill for $8. Truth is, I was over-Budweisered at the time.

I took it home, slapped the mag-mount antenna on the refrigerator, sat down at the kitchen table and started talking. I didn't know from rules.

When somebody came back, I panicked! My God, this thing works! We said a lot of nothings. The only thing I knew about CB was that you were supposed to say "good buddy" and "over."

Cutting to chase, omitting everything else, I passed the FCC exams up to Amateur Extra Class, in short order. 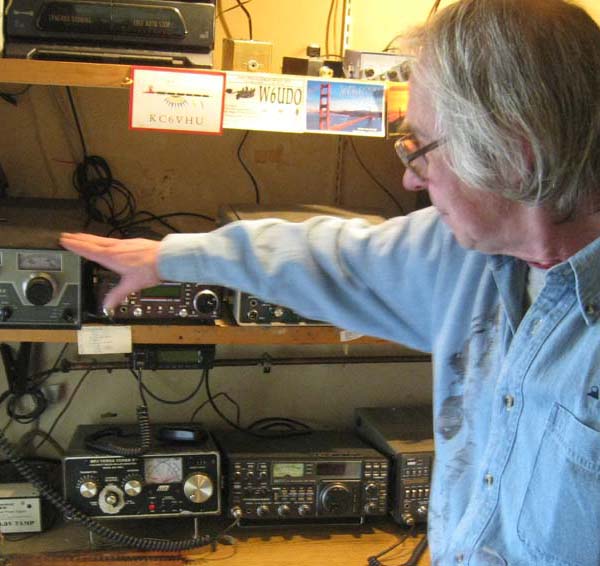 Mathematics, logical thinking, abstract thought, was never my strong suit. To say that I was an underachiever in those areas would be a kind statement.

My renewed interest in radio was different, though. It gave me a context for the math, a "why." And as I plowed through the exams, mathematics became interesting, beautiful, even—and not so difficult. Not that it was a free ride, bit it came to hold relevancy.

After earning my Extra Class license, I eyeballed the commercial GROL license (formerly the First Class Radio Operator License) and in the year 2000, I passed that exam. Less than a year later I sat for the coveted Radar Endorsement and passed that one also. Excepting an addendum here or there, this is as high a ticket the Commission grants.

There is no bragging here. It’s more to say that when there is a reason for knowing something, and a desire to know it, it becomes more possible.

The algebra, geometry and trig presented in high school by, mostly, dull-witted teachers, only terrified me and did not assist the cause for learning. Amateur radio, on the other hand, gave me reason to wish to know, to become familiar with an order of laws that directly affects our lives.

And following up, Ron sent me the following note:
In 2000 I sat for the coveted GROL Exam (the highest Professional/Commercial license the FCC issues)... passed with flying colors and also snagged the coveted Ship's Radar endorsement. The license is issued "for life."

Writer and poet Ron Hobbs lives in San Francisco. He was active in the New York poetry scene in the 1960s.

A glorious and poetic example of: "when there is a reason for knowing something, and a desire to know it, it becomes more possible." Thank you Ron for taking us on a journey through your passion for radio! And I learned something too! :)

I really enjoyed your story. Congrats on getting that coveted license -- for life! *cheering* â™¥.

Enjoyed this. So many threads to life.

really enjoyed your story Ron and also talking with you on the radio!

What a lovely story Ronald. I do hope you will say more about the subjects. The connection between childhood nostalgia and later life tinkering and satisfaction is heartwarming. Hope you are sharing your knowledge and joy with others, young and old.

A great story, WHY did you stop??
This was like goiong to the mnoon and stoping 3ft short of a landing, then going home.

A wonderful story from many dimensions. Every teacher should read this to understand that what we learn has everything to do with having a motivation to learn or to see value in the learning. We don't all the learn the same way. Thank you for sharing your story.

Really enjoyed this -- particularly the feel you create of being kids again. Like the perspective of you hanging out with old train operators and description of where you lived. The end is very inspiring too. What you loved as a kid, you now love as an adult - whether for same or different reasons.