Across A Great Divide I was giving my friend Rosemary Peterson a lift to the airport where she’d be returning home to Seattle. I must have been telling her about the dog my wife got from a rescue club, an English Bull Terrier, and it stimulated her to tell me a story.
Rosemary’s animal stories are special, but it took me a couple of years before I thought to ask if I could record a few. She told me four stories, and here’s one of them.… RW

Across a Great Divide
I have another story. It’s about our golden retriever, Alex, and one of our cats. We had several cats who lived in the barn. They were sweet and one of the cats would come out of the barn each morning. It was a ritual. The golden retriever sat on the front porch of the house. Each morning he’d see the cat come out and the cat would cautiously take steps toward the house, “meow.... meow.... meow,” hoping that it wasn’t going to happen this time. But within moments, Alex would sprint down the walkway and the kitty would manage to get from the barn to this tree.
It was a ritual—Alex chasing and barking and running the cat up the tree—every single day. The poor kitty! For the rest of the morning we’d hope the kitty would make it down out of the tree and, when we had a moment, we’d go over and coax it. It was a routine. It was like a game. I don’t know how long it went on.
One day Alex was standing next to me and I was petting him when the cat came out of the barn. I felt this impulse in the dog and I grabbed his collar, “No, Alex!”
Well, it was a good hundred yards from the house to the barn and maybe thirty feet to the tree. So there was a good distance between us, from the tree to the house where we were. So I’m holding Alex by the collar and the cat hasn’t gone up the tree yet. He’s just cautiously taking steps, keeping an eye on us, and meowing.
I’m holding the collar and saying, “No, Alex. No!”
He’s just straining to go after the cat. I said, “Nooo. Noooo.” And then I sat down beside Alex and said, “Sit, Alex. Sit. Now let’s think about this together.”
Then I looked at the cat and said, “Come here, kitty.” And the cat cautiously took a few steps toward us.
Alex is straining to go after the cat. I started petting Alex and saying, “Nooo, Alex. It’s a good kitty.”
And, after awhile, he wasn’t straining as much at all. I kept saying to the kitty, “Come, kitty. Come on. Come on.” And finally we were all about ten feet apart.
I kept saying to Alex, “It’s a nice kitty. You’re such a good dog. Here kitty, kitty.” —having no idea, I mean, I didn’t even think about what was going to happen. I just kept calling the kitty and holding the dog.
Then the kitty got close and pretty soon, I had the dog in one hand while I was petting the kitty with the other one!
I said, “Good kitty.” And of course, you know how a cat likes to rub up against you when it’s close. So the cat was trusting enough to rub up against me. And there’s Alex with his tail just wagging away while he’s sitting there on the ground with all this energy! Because now he doesn’t know what to do. The kitty is right there! And I’m petting the kitty.
Pretty soon, they look at each other. They stare at each other. And then they are closer, and finally their noses touch!
In fact, the kitty rubs up against Alex’s front legs, up against the dog’s legs! And so I’m petting them both.
It’s all over!
From then on… I mean, my husband came home from work and he couldn’t believe it!
The cat and the dog are laying down together in the sun in the yard, sleeping. The kitty is lying there nestled up inside Alex’s extended legs. [laughs] They were just like little pals, ever after. 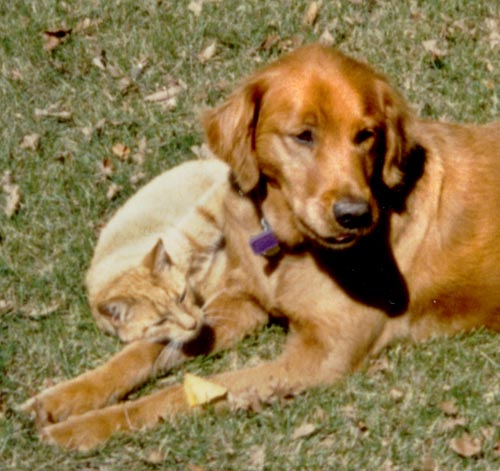 Rosemary Peterson lives in Seattle and tells great stories about her animals.

Yes, Rosemary probably has more stories about realities and connections with animals. She is very special, we grew up on a farm together -she is my sister!
Phil

Really, the story of the cat and the dog taught a big lesson regarding how to reconcile enemies coupled with how not to see any person as our enemies, unless otherwise. It tells people not to be paranoid. Thanks for the lesson. It is actually didactic.