[an excerpt from an unpublished ms. by Peter Newsom]


I've been in an esoteric kind of spiritual path for 35 years now and yet I must admit that, in a lot of ways, I didn't know if we could really touch the Higher for many, many years. Then I met Marty, the electrician.
Marty was one of the 12 master electricians of all of New York City, the highest slot there is in the electrician food chain. He had buildings like the Empire State building and the Plaza under his command. He could turn them off if he decided, and he didn't need to ask anybody. It's a pretty heady position, and Marty had made and spent over a million already five times when I met him.
He was then about 50. He was a small, wiry guy and constantly telling jokes. He had decided to make his current million in a new way by hiring some young boys, all about 18 or 19, and promising to make them millionaires on the condition that they did exactly what he said, where he said, when he said, and never to call in sick "even if they were dead."
As a result, he had a number of passionately devoted young helpers doing the impossible for him, often working 24 or even 48 hour shifts, and he could do miraculous things with these guys. He gave them all an allowance and the vast majority of the money they earned went in the bank. They all obviously felt very lucky to be with Marty and they would literally do anything for him.
He promised he would make each one of them a millionaire if they worked for him for five years in this way. They were halfway there and they were all looking pretty stoked. The first apartment they wired up in my building it took his team of four guys one day, 24 hours straight. Then he walked up to me the next morning at 7 a.m. and asked to get paid. I had only met him the day before. 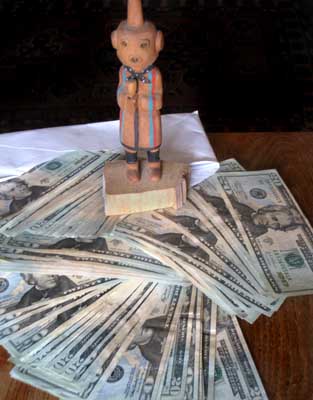 Here he was a total stranger and yet somehow I asked him if I could instead borrow the same amount, a few thousand dollars. Without hesitation he said, "Sure. Could you use more?"
A little taken aback, I said "How about five grand?  It's been a pretty bad week."
He said, "No problem," handing it to me in cash on the spot. Then each time Marty finished an apartment we would repeat this odd exchange. Each time he'd ask to get paid and each time I'd ask him to loan me usually that same amount, or even a little more.
Each time I would pay him off, of course, in the six to seven months before the next apartment was ready to be rewired. But the last time I needed a little more, and when I asked for it he handed it over. It was so much money that I said, "Marty, how can you be the way you are?"
He asked what I meant.
I said "You trust me again and again - really a total stranger - and in this town, Manhattan!"
Marty just said, "I could see you were good for it. Besides, Peter, remember- in a river of takers, the giver floats to the top!"

I was blown away, though I had known when I had first asked him, I think, from some quiet place in myself, that Marty, a total stranger, would loan me the money. And now that I look back, I see he probably knew it was safe the same way from that same place in himself.
Well I had been, at that point, about 23 years in an esoteric spiritual path and after that river quote, I needed to know if he was in an esoteric path, too. I had suspected it a few times, but now I really had to know. So I asked him. He said "Yeah, ever since Nam. I have teacher. He's this Buddhist monk that I started seeing after the war. He's in Thailand. And as matter of fact, he told me last summer that I would meet you. He even described you to me."

Peter Newsom is a psychiatrist who practices in the Mountain View, Menlo Park area south of San Francisco.