A Day with the Langs: Judith Selby Lang & Richard Lang It was a temperate day last March when the three of us journeyed to Kehoe Beach north of San Francisco to collect plastic washed up on the sands - a weekly pilgrimage for Judith and Richard Lang since 1999. Each outing is really a meditation and through this practice they have collected over two tons of plastic in eleven years.
We park at the entrance to Kehoe Beach and, with bags in hand, begin the quarter mile walk to the ocean. The beauty along the path is breathtaking, and all the while, Richard is sharing the local lore, and stopping here and there to take in the beauty.
We arrive at the ocean; the surf is strong. As we walk the beach, Richard tells me the real "season" for picking up trash ends in January. We still manage to fill three bags and drag them back to the car: remnants of fishing line, ghost nets and miscellaneous plastic debris. "Do you want to keep some?" Judith asks, and pulls out some colorful plastic shards and a small red toy for my son, Peter.
I'm struck by my friends' love of the natural world and their commitment to raising awareness of the ubiquity of plastic trash and its impact on delicate ecosystems. Compelled to alert more people to this sobering reality, the Langs have found many ways of turning their collected plastic debris into works of art. 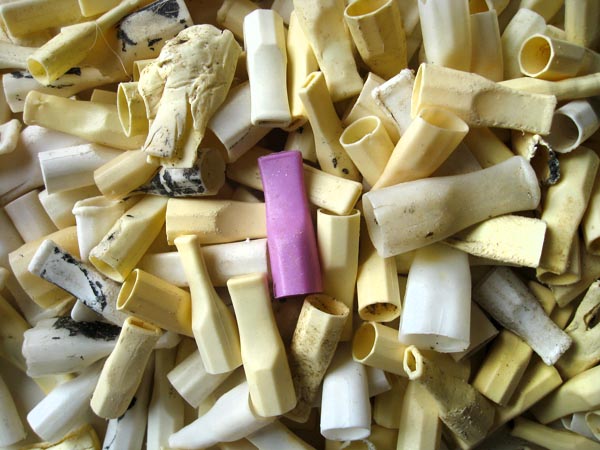 We talk about an upcoming exhibit. At the time, I was curating an exhibit for Cavallo Point Lodge near the Golden Gate Bridge entitled "From Kehoe to Cavallo, the Mystery in the Mess." The exhibit featured a collection of the Langs' archival prints of colorful arrangements of beach plastic that had been commissioned for guest rooms at the lodge. The exhibit also highlighted the work of the Plastic Pollution Coalition, a nonprofit committed to stopping plastic pollution and its toxic impacts worldwide.
What I've come to appreciate and love about the Langs' approach to their artwork is its humor and playfulness and how it invites a curiosity to learn more. Most importantly, it inspires the question, What can we do?
Like the Langs, we can focus on one place. We can pick up plastic detritus one piece at a time and not purchase plastic in the first place. We can stop buying single-use plastic. We can engage politicians, schools, and corporations in problem solving. And we can vote with our pocketbooks. - Anne Veh 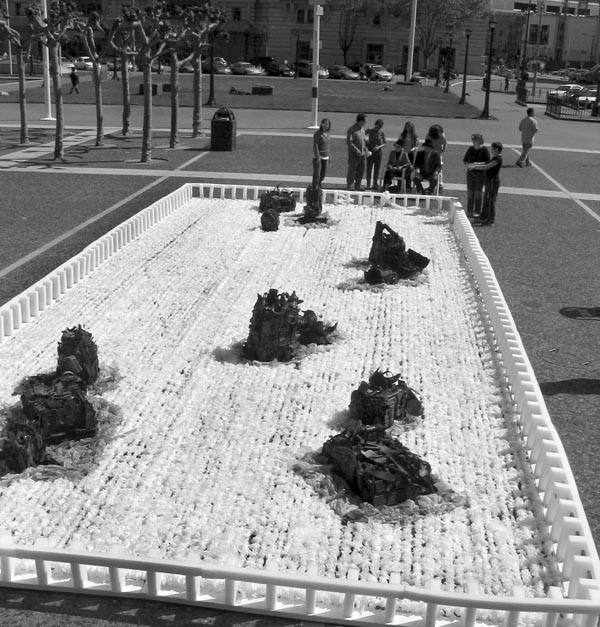 Seeing the famous Ryoanji garden in Japan recreated from discarded plastic served as my introduction to San Francisco artist Judith Selby Lang. The introduction came via Reiko Fujii's documentary film of Lang's project. Under Lang's direction, a group of friends installed the work in San Francisco's Civic Plaza as part of Earth Day activities in 2007. Created from over 6000 discarded plastic bags, plastic collected from Kehoe Beach and discarded plastic packing from consumer electronics, it's a striking example of the many ways Lang has made art from this worldwide blight.
Not long after I'd seen Reiko's film, I made the acquaintance of Judith's husband, Richard Lang, owner and director of Electric Works Gallery in San Francisco. The Langs, I discovered, met on Kehoe Beach in 1999. Both were already in their fifties. They soon recognized in each other kindred spirits. Each had been collecting plastic debris for three years when they met and, between them, they shared over fifty years of experience as studio artists. Each had also been long-time instructors at the College of Marin and UC Santa Cruz.
Running into each other at Kehoe Beach led to a powerful collaboration although, as they acknowledge, it took awhile for them to sort out how to work together. Finding their way through this tricky passage led to, in the spring of 2004, taking the leap into marriage.
As they write, "We combine our love of the natural world with our interest in science to produce an ongoing series of artworks about the oceans and the environment."
It's about listening to that small inner voice that's often necessarily full of impracticality, they say and add, "We are witness to what can happen if you follow an idea wherever it takes you."
The Langs take pains to avoid a didactic tone in their work hoping the quiet example of beauty can add its subtle force to the growing counterforce to the worldwide dumping of plastics.
In 2005 the United Nations Environmental Program reported that there are 46,000 pieces of visible plastic floating in every square mile of the ocean. And perhaps even more sinks to the bottom.
We have all been sold the myth of disposable plastic, as they point out. We throw it away, but it stays with us and may ultimately irreparably alter the planet. Some of the plastic tossed away and returned, sea worn, on Kehoe Beach is from the 1940s when synthetics can into use during the war effort. The Langs report finding items that date from that era, intact and completely identifiable.
As Sam Bower of greenmuseum.org has said many times, "We need to find creative, artful solutions to these seemingly impossible problems that are delightful and engaging."
The Langs see it that way, too. Pleasure, not fear, is the prime motivator for human change, they argue. "We collect only the plastic bits that wash out of the Pacific Ocean and onto Kehoe Beach in the Point Reyes National Seashore. The beauty of just that one thousand yards and what we find there has become our way to bring into human focus the planetary dilemma of plastic pollution. We approach this above all with love and hope."
From the Academy of Sciences in San Francisco to the Corps of Engineers Bay Model, the Langs' work has inspired thousands of people to make their own creations from what they find on washed up on beaches. Here's a small film of the Langs' work, One Plastic Beach by Tess Thackara. It premiered at the Geography of Hope Film Festival in Point Reyes, CA February 2011. - Richard Whittaker

The Langs maintain a blog and there's more here. 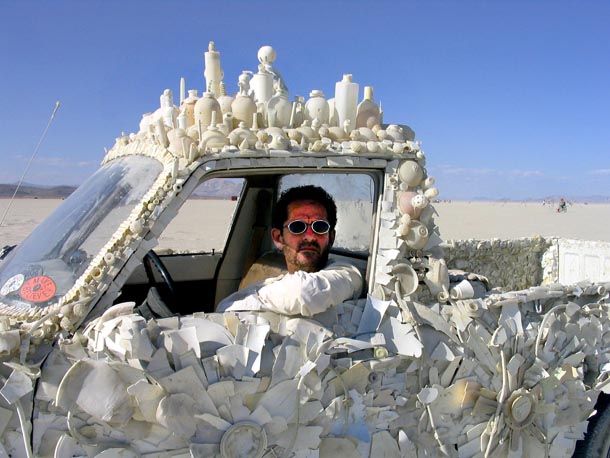 Anne Veh is an indedpendent curator, writer and film-maker. Richard Whittaker is the founding editor of works & conversations and West Coast editor of Parabola magazine.

So glad the Langs are doing this and I think it is a WONDERFUL way to give back to all of us and the earth! Warmly, ginny

What a beautiful and inspiring story! It's a perfect example of how combining one's love and creativity creates a gift for ALL. Thank You for sharing your gift of Love.

Perhaps we all need to take up the practice of reuse/recycle artists?

Grateful for the Lang's environmental efforts, contributions and transformation of plastic waste to beauty and powerful messages. Thank you for bringing their work to our consciousness. And inspiring us to contemplate what we can do in our lil corners of the world to make a difference. â™¡

A Man Impossible to Classify photo: r. whittaker One of my first experiences in San Francisco ... Read More 747453 views

Say Grace I am deeply delighted to live on a planet that is so big and varied that I can ... Read More 12181 views

Cotton and Silk Vorbeck quilt, detail I’m working on the last panel of a pair of ... Read More 13601 views

An Interview with Betsy Damon I first heard about Betsy Damon from Sam Bower of greenmuseum.org. Water ... Read More 46940 views

A Man Impossible to Classify photo: r. whittaker One of my first experiences in San Francisco ... Read More 747453 views

Interview with Bill Douglass - Jimbo's Bop City and Other Tales At the time I'd first gotten to know the widely respected ... Read More 369558 views

Greeting the Light It was thanks to artist Walter Gabrielson that I was able to get ... Read More 317291 views