In Memory of Richard Berger Every conversation I had with Richard Berger was a work of art.
I visited him in order to talk with him, not to socialize. Having an inescapable inclination—“the sickness” as my old philosophy professor called it—toward big questions, I wanted to hear what he might say about things I pondered myself. I asked him about the meaning of the architectural space in one of his artworks, for example. Putting a question like that to Richard was always rewarded with unsuspected revelations. What he said was often dazzling and usually spiced with his uniquely acerbic wit. Remarking about his use of shadows in another piece, I suggested it invoked Plato’s Allegory of the Cave. He was already there and said, “In moments of caprice, I’ve described this as Howdy Doody meets Plato.” Pure Berger.
Later in that same conversation, Mircia Eliade’s linkage of the creative act with the sacred came up. I asked how he would place such an understanding in contemporary life. He replied, “It’s a good counter to our contemporary situation. Things that don’t have an immediate quantifiability tend to disappear. You have to learn language and grammar and a lot of things that can be evaluated and quantified, but ultimately, in order to be able to confront what’s priceless, you have to become a poet.”
The priceless is unquantifiable; that little leap, obvious if you think about it, is poetry. Poetry is compact magic—the perfect running catch, the aria that pierces the heart, the pause and then the gesture that says it all. It’s at the core of art at its best. Richard was not sentimental about it; he was lucid. Speaking about magic, he said, “I think it happens. Many of the times, when it exists, it’s not grandiose at all. You could think of the attribute of magic as the indelibility of the experience, as something you don’t forget.” This formulation, so concise in its way, might easily be passed over, but thinking about its implications would make for a fascinating journey. The refrain I was most used to hearing when I mentioned Richard to those who knew him was, “Oh, he’s a genius.”
In any exchange with Richard, a piece of magic might be tossed off that could be heard nowhere else. It’s not surprising that he was a fine writer. Over the years, besides two interviews, I published three of his pieces: "Pal"1, his account of a relationship with a feral tomcat that’s clearly an analogue for Berger himself; “Elephanta”2, a journal excerpt from his travels in India; “To All Artists Known and Unknown,”3 his meditation on the death of a homeless artist who he'd often seen sitting alone in SFAI's cafe.

It seems to me that Richard’s musical gifts played an integral role in the unpredictable delight of listening to him talk on any topic. I knew little about his musical side, but he played several instruments quite well and had a keen appreciation for a wide range of music. His model for speaking—to his classes, or a formal audience—was the jazz musician's solo. It always rescued his eloquence from the dry intellectuality so frequently encountered in academic discourses about art.
One of Richard’s former students told me how he’d been present at a heady panel discussion at SFAI about an artist’s work Richard found uninteresting. Berger wasn’t on the panel, but someone asked him to weigh in on the artist’s work. The student told me, with a touch of awe, that he improvised a masterpiece of specious elaboration on the spot. It must have been impressive because the artist himself thanked Berger. For those with ears to hear, it must have been a sly entertainment as well as a teaching.

Is there a relationship between suffering and depth? I suspect there is. Something kept me from asking certain kinds of questions with Richard. I don’t remember asking him about the physical traumas I dimly knew about. In approaching him I had my own insecurities to deal with. Like others I’m sure, at first I found him intimidating. He projected a forbidding aura of sheer physical presence, and one also sensed that with a thoughtless approach things could go poorly. 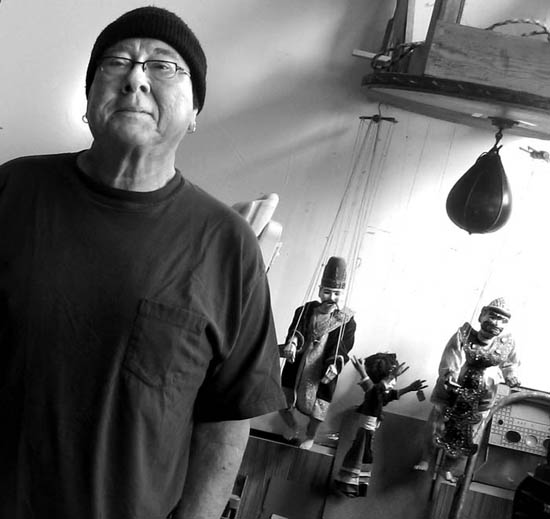 There had been physical trauma, but there was also the almost impossible situation of visual artists in contemporary life. In our first interview he remarked, “I find myself questioning what seems to be a pretty arcane cul de sac within which I’m working. In a moment of transient bitterness yesterday I described it as ‘squandering my imagination’ making these things that virtually nobody sees.”
In a later conversation, he reflected, “The idea that alone in my studio I would make a thing out of my own necessities and my own considerations and place it in the world and then judge its viability and its value based on whether or not somebody bought it—I just thought I don’t need that anymore. The notion that whatever this object is, it’s going to have to interface with a whole modality of validation that I find just basically to be business—and business with some dimension of predation and corruption and all that kind of stuff—I don’t think I need that. And I was never diligent about pursuing that kind of career stuff.”
But there was the inevitable doubt, too. He was not selling much work. He was not getting a lot of shows. As he said, “It’s certainly occurred to me that’s because my stuff wasn’t good enough. You know?”
Any artist in this culture who has not cracked the tiny circle in which both critical attention and money flows in is going to have to face this question. I'm not alone in seeing Berger at the top of the list of contemporary artists who should have been, but never found their way into that charmed circle. He was much loved and respected by his students, his colleagues and the many other artists who knew him.

The former publisher of Parabola, Lorraine Kisley, gave me some tips when I began publishing in 1990. After eight years of on-the-job training I was ready to step up to a more focused effort with the launch of works & conversations. For that inaugural issue Lorraine told me to use my best material and bring in some big names if you could. Richard Berger was not a big name, like Judy Pfaff or Squeak Carnwath, but there was no question that he belonged with them in issue #1.

Richard worked for several years on his last project, the construction of a scale model of the Konark Sun Temple in India. The temple’s main tower had collapsed centuries earlier. I remember talking with him before he began the project. I was excited just hearing about it. Later, he shared his design for the collapsed tower with me. The interior space of the tower would be in the shape of a human figure—or perhaps the figure was to be understood as representing a Hindu god. I loved the symbolism of it. He altered that idea for the tower design, but his finished piece was still a small-scale tour de force. It was shown at Meridian Gallery in San Francisco, but attracted little notice otherwise. Sadly, this is not surprising. But while The Prosthetic Temple is impressive in terms of what I’d call an ordinary scale, the artist’s vision of its meaning belongs to another scale entirely. Here is his statement about his last work:
"I propose that one attribute of the production of those makers we call artists, historically and culturally, constitutes a kind of prosthetic activity to address an unforgettable and irreconcilable absence. To forget would be to surrender to incompleteness, an untenable and intolerable state. This production, the work of the artist, is intended to, however imperfectly, reestablish completeness. This leads to the consideration of cutlural, psychic, intellectual and/or spiritual categories of the prosthetic construct.
The cultural behavior called “the arts” could be characterized as the manufacture of interrelated tokens alluding to or articulating prosthetic constructs of a collective nature, not to address issues of mobility or appearance as with a bodily prosthesis, but rather to intervene on a number of levels in the very human predicament of what is collectively missing needing to be acknowledged and reconfigured, with the understanding that just like the missing extremity, what is missing is not an experienced recollection, but a gnawing presence. The sculpture titled The Prosthetic Temple constitutes a prosthetic expression of all that I didn’t know was missing, thus far." 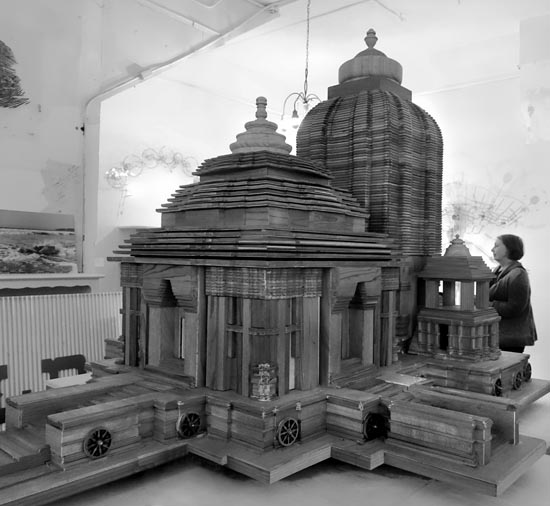 Over thirty years ago I heard a talk by Laurens van der Post. He was speaking about Shakespeare’s last play, The Tempest. He believed it was Shakespeare’s expression of what he’d learned—that art can only take one so far. To go further, it was necessary to turn to something else; it was necessary to turn to one of the great avenues toward the sacred that have developed in the long history of mankind. Thinking about the work Richard Berger produced in the last years of his life, I couldn’t help remembering van der Post’s memorable words so long ago. —RW

Hi Richard,
Thank you for giving me something wonderful to read. Richard Berger and I taught at SFAI for many years. He chaired sculpture and I chaired painting and I also ran the grad program. We shared countless crits and he had me doubled over laughing or in shock at just about each encounter. One of his favorite things to say to a student whose work he found to be incomprehensible was "sweet bleeding liver of Jesus; Is this really your art?" His own art during the 1980's was outrageously complicated, original and often gorgeous. When I left SFAI in 1990; One of the things I missed the most was talking and laughing with the amazing Richard Berger.

Thank you for this. I was a student of Richard's and curated a show of the homeless artist with him. He spent many weeks with us in France before his Indian adventures. I would like very much to have copies of yours and his articles. Is that possible?