Looking for a House in Greece--A Tour with Heidegger Such an eminently suitable traveling companion, Heidegger, with whom a little goes a long way.

Building is not merely a means and a way toward dwelling—to build is in itself already to dwell. So long as we do not bear in mind that all building is in itself a dwelling, we cannot even adequately ask, let alone properly decide, what the building of buildings might be in its essence.1

We begin by looking at the Parthenon—the virgin’s chamber—on Athens’ Acropolis where lie the remains of buildings decreed by Delphic Oracle (510 B.C.) to be the abode of Gods and off-limits to humans. Who, then, built them? Although dedicated to Athena, sacred to her, she who sprang fully built from Zeus’ forehead did not build them. And though they say that there was a statue of her—very grand, all ivory and gold—she is not there. Spaces receive their essential being from locations and not from space. Man’s relation to locations and through locations to spaces, inheres in his dwelling. The relationship between man and space is none other than dwelling.2

None of the places on the Acropolis are for sale but, apparently, all are up for grabs. Supposedly the finest example of classical architecture, the Erechtheion, is notable for turning six marble columns into women. 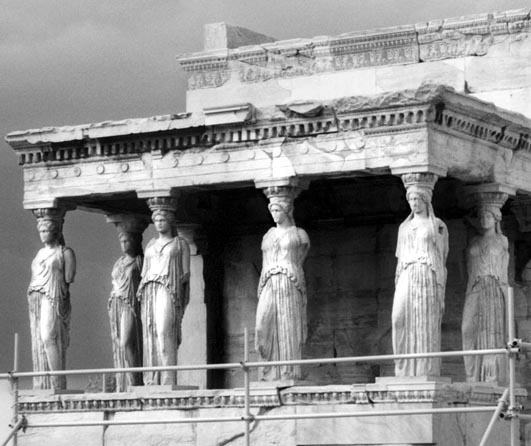 Modeled after the enslaved widows of the men slaughtered for having sided with the Persians against Athens, these women forever dwell in the space between the floor and the heavy roof which rests directly on their heads. Of course, what we see are just reproductions. Five of the women are imprisoned in a special airless glass enclosure in the museum next door and the sixth was kidnapped by Lord Elgin and carried away on a ship, exiled to England to stand bare-headed, alone. The relation between women and their space in the triangular pediments of Acropolis buildings is hardly better. They are very often cramped (they are large women after all) and reduced to an anxious, crouching position. Not much space at all.

Only if we are capable of dwelling, only then can we build. As soon as we try to think of the essence of constructive building in terms of a letting-dwell, we come to know more clearly what the process of making consists in by which building is accomplished.3

Off to Olympia where Alph the sacred river still runs, a major site of sacred real estate and the location of the field of the original Olympic Games which was excavated by order of Hitler from 1941-1944. (Heidegger is oddly mute on this subject.) It seems that the statue of Zeus can be seen today in Arkansas.

Whatever the process was that allowed the early Greeks to handle and carve immense stones, they must have had trouble in view of the great number left lying about. I left 100 drachmas in tribute for Zeus, and for Hera if she ever decides to come back for her head.

To preserve the four-fold—to save the earth, to receive the sky, to await the divinities, to initiate mortals—the four-fold preserving is the simple essence of dwelling. In this way, then do genuine buildings give form to dwelling in its essence.4

Now in the south, under the Aegean sky let abundantly in beside the same color of sea, we are surrounded by the genuine hives of bee-ings, sacredly instructed to build, though the fruits of their labor are ruthlessly stolen and sold by the roadside. We sample their wares and though the sweetness abides, they have swarmed and are no longer at home.

Still without a house, but stirred by my companion, I wonder how we can dwell when we have not yet learned how to be?

While companionless others cook field greens outside stone huts the way they have always done, I begin to search anew, more modestly, taking as my temporary abode the place that comes to hand—or foot—and await the divinities.

Kathleen Cramer is a poet, actor and playwright and living in the Bay Area.