Moving On: Thoughts on Art Left Behind The poignancy of the move was like a fine dust, best kept airborne through activity so it wouldn’t settle.

My sister and I were on hand to move my mother from the home nestled against the eastern foothills of San Jose where she had lived alone for 14 years. We were marching along with boxes, assorted piles, the moving crew and their inventory sheets. I expected the day to be difficult. Speed and efficiency were hoped-for antidotes.

My mother has been many things during her 88 years. But the thread that has emerged to me ever more clearly has been that of an artist. You won’t find her in any books or in any permanent collections, unless you count the homes of family members and a few other admirers. But the way the day transpired changed the way I think about being an artist, leaving a residue of more questions than answers, but a new comfort with that state of uncertainty.

A move disassembles the landscape of a home and in the process both deconstructs a life and at the same time brings it into focus. This one was no different. The photos, furniture, dishes, books and jewelry were all laden with memories that were made more vivid as they were dislodged from their usual surroundings. 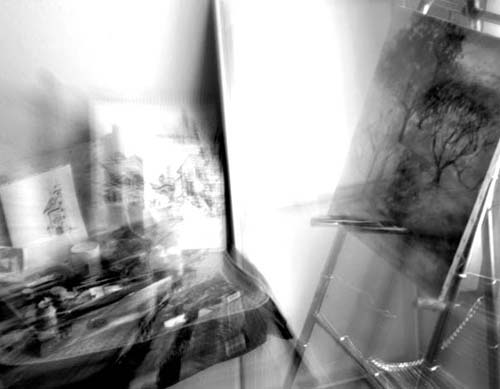 We turned the place upside down and most things succumbed to gravity and fell right into their intended boxes or trash bags. But like the contents of a wrinkled old sack, some items refused to drop out, clinging to the backs of drawers, corners of upper shelves and backsides of furniture. They were stubborn, it seemed, because they had something to say.

For instance, I expected a quick dismantling when I set out to remove the backboard of the bed in the guest bedroom. But I ran up against a way of life. The backboard turned out to be an old closet door, covered with fabric and padding held in place by staples and glue. Turned on its side and nestled between bed and wall, who would know? My mother was of a generation more comfortable with frugality than luxury. For her, repurposing was more natural than simply discarding and buying anew.

Another discovery emerged from deep in the back of a drawer of kitchen utensils. It was an old wooden rolling pin, minus its handles. Under the strong, fleshy hands of my Mother’s mother, piecrusts, biscuits and cookies were pressed on to floury counter tops. When I suggested the trash bin for the non-functioning rolling pin, not knowing its origin, my mother softly said, “No, that was my mother’s.”

A life of thrift played a part in where this artist practiced her painting for most of her adult life, as I suspect it did for many of her generation. Homes had living rooms, kitchens, bedrooms and bathrooms. Art was something you did in a class, or outside, and was neatly folded up and tucked away at home—in our case, in a closet or the garage.

In her 14 years living alone, Kathrine Van Slambrouck began to break this habit of treating the practice of “art” as a household afterthought, something to be largely kept out of view. She began by taking over a corner of her garage, planting her easel in a semi-permanent state, forcing other things (like the car) to adjust for a change. With that as a beachhead, she pushed onward eventually occupying a part of her kitchen with easel, canvases and her box of paints permanently at the ready.

As part of the move to a much smaller apartment with virtually no storage space, we had already anticipated the need to find a home for 50 or so paintings that stood upright in a gerry-rigged wooden rack nailed to her garage wall. We rented a storage locker. It would safely preserve these many years of work.

A moving truck brought the paintings to the storage facility with us trailing behind. Our assigned storage locker was on the second floor and the paintings were brought upstairs via a large metal-walled elevator and then rolled on carts through a maze of hallways to their assigned space. As we approached, I began to have that feeling of leaving a small child on their first day of nursery school.

As we positioned everything neatly in the small locker, the three of us backed away and sort of stared into the room, not sure how to gracefully turn and leave.

“That’s what I did with my life,” pronounced my mother.


In the months that have passed since that day, she has often talked about these paintings with the concern of a parent. She would wake one day with a near desperate need to bring one of them home. Work on one that was unfinished. Hang one anew. There seemed some unquenchable need to have these works in some more familiar setting, either close at hand and accessible or in a place where they had some active meaning.

Trying to ease the anxiety I would suggest that she created these paintings not ultimately for the sake of them hanging in recognition somewhere. Rather, for the joy of the process of creating, a process that continued in her new apartment.

She would listen patiently, but answer: “Would you talk if no one could hear you?”

And so these paintings remain in search of a setting where they are “heard.” And I find myself wondering just exactly how many such works of art are lodged in the closets, garages, under beds, and attics of countless others, never marketable enough to be sold and hung, but quietly sitting, waiting, testimony to the artist’s imperative to create even when there is never any clear destination for that which is created.

Paul Van Slambrouck, a Pulitzer Prize winning journalist, was chief editor of the Christian Science Monitor and is a contributing editor for works & conversations.