On Wonder (a review) Wonder. It’s something we long for, isn’t it? I do, at least. That’s why when I saw the ad for the Wonder exhibit at the Smithsonian’s Renwick Gallery in DC, I had to go. What an audacious and somewhat unimaginative title: Wonder. What kind of a curatorial tour de force could justify such a choice?
The show was a series of installations by, as NPR put it, nine leading contemporary artists, including Leo Villareal (who did the Bay Lights installation on the SF Bay Bridge), Patrick Dougherty (who famously weaves twigs into bulbous architectural forms), Maya Lin (who controversially designed the Vietnam War Memorial down the road), Janet Echelman, Jennifer Angus, and four more. Each artist occupied a single large room and was apparently given pretty free rein. The art was decently stimulating, of an unusual scale, and well executed… so why did I walk out feeling a little anxiety and a little despair rather than the uplift I had hoped for?
I’ve always liked the work of Patrick Dougherty, whose woven twigs spin into enticing yet nightmarish renderings of eggs and houses and goiterous growths set in public plazas and large museum spaces. The installation was about looking at things and the spaces created by those things, which bore the same playful qualities of a Richard Serra sculpture. These were not conceptual pieces in any way that I could discern, they were tactile and contained. I wandered in and out of them, surprised credulous children by poking my head through unexpected openings in the material. I took photographs. I secretly ran my fingers over the branches out of sight of the guards. Delightful. 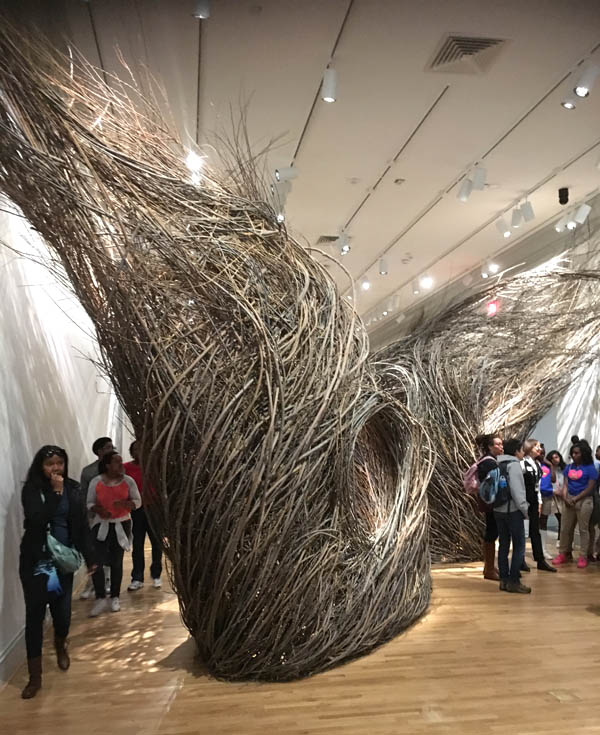 I  I walked around the space three times, attempting to find every angle I might have missed, then after a few minutes, I moved on to the next room. In it was a lovely installation by Gabriel Dawe consisting of hundreds (thousands?) of colored threads strung from floor to ceiling with such granular care that when you walked by, a moiré effect caused the threads to roll by in a shimmering rainbow.
Over the steps to the second floor, Leo Villareal’s computerized blinking LEDs formed stars and spheres as people read the pamphlets and explained to one another how the computer made endless unique patterns. The implication was that this was the only time you would ever perceive the exact image before you. Each moment of the installation different from the last, each moment unique; it was an idea I had to remind myself of as I watched; the uniqueness was factual, but not particularly experiential. The didactic wall card emphasized the point, and I made a note of it and moved onto the next room. On the ceiling there a whale-sized fabric formed an intensity map of an earthquake, the rotating colors of the stage lights giving it an undulating, shimmering Sparkletts-delivery-truck feel.
Dazzle and twinkle and undulate and explore: were these the keywords that the artists had received in the Wonder brief? What about immerse and discover? Were such terms the curatorial jumping off point? I imagined the conversations, the curators declaring that everything would be big and that visitors would not be able to just look at the art, they would be forced to immerse themselves in it, to look in new ways – up and out and in between and around.
The exhibition also housed wallpaper made of insects, stalagmites made of index cards, a bejeweled map of the Chesapeake, and a 3D printed replica of a replica of a Greek statue (replete with explanatory plaque wondering at the light irony of all the levels of replication.) – all of it fairly pleasurable and nice enough to look at.
I grabbed my bag from the self-service bag check (the lady giving me a happy I-told-you-so look because she had insisted that nothing had ever been stolen from the room) and walked out onto the sidewalk to find the corners blocked by police motorcycles as everyone waited in anticipation for a motorcade to roll by. “It’s the Vice President,” yelled a man from his bikeshare bike, “he’s just gone to lunch.”
Somewhere down the road, Joe Biden was digesting, perhaps wiping some mustard from his pants or wondering if the fact that he had held that particular job for seven years had meant anything to the world. Maybe he was marveling at how, despite everything everyone had told him about grief, the death of his son had carved out a hole in him that refused to close.
And we stood on the street, we bystanders, and watched the blackness of the black windows pass, trying to guess which car was his so that we could demarcate this moment as unlike any other, special because something remarkable had happened. Of course we wouldn’t see the man himself, just the black cars passing, but our attention was that of someone watching the Vice President pass, a little wonder in it – the senses attuned to the question: what is it like when a Vice President passes? 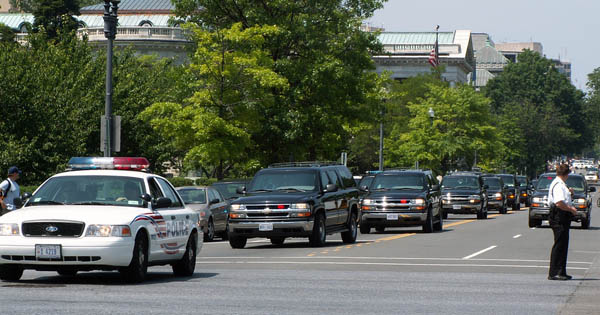 Wonder, at the Smithsonian American Art Museum Renwick Gallery in Washington DC, closes on July 10, 2016. The exhibition is free.

Abraham Burickson is the co-founder and Artistic Director of Odyssey Works, an interdisciplinary performance group that makes community-engaged bespoke performances for intimate audiences. Trained in architecture at Cornell University, Burickson’s work spans writing, design, performance, and sound art. He is the co-author (with Ayden LeRoux) of Odyssey Works: Transformative Experiences for an Audience of One, a book about new approaches to art and performance to be published by Princeton Architectural Press in the Fall of 2016.He is a contributing editor for works + conversations.

a long read, a long thought, a long effort of attention, most welcome and somehow strangely satisfying, the lighting up of wonder.

So very well developed. My mind relaxed and followed the thought without objecting . . . almost like a trusting child.