Thinking about LSRI’s first ever summer session abroad, Dame Eleanor reviews the roster once more. She’s worried. She will be taking a few students to Rome including Neville Hare, who has been added by LSRI’s director, Orange Bearcat. Dame Eleanor knows Neville’s job will be to keep an eye on everything and report it all to the director. 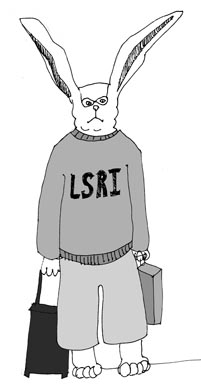 But having Indigo Animal along as co-leader will be very helpful. Indigo will be shocked by the larger world, but Indigo is solid, intrepid, discreet, and above all, committed to the Classical! Indigo is good at tolerating anxiety and already has some experience venturing beyond the known territory. And besides, muses the marmot, as counterintuitive as it may seem, Indigo has a natural ability to blend into the surroundings.

Later that day Indigo Animal and Dame Eleanor meet for a planning session. The marmot shares some of her thoughts. 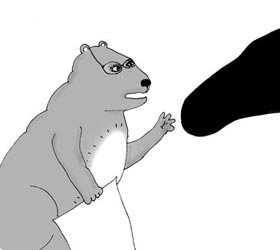 “So, Indigo, since reality has set in regarding the difficulties of accomplishing the summer session abroad and bringing everyone back in one piece, I think we should reduce the number of participants to five, including you and me.” 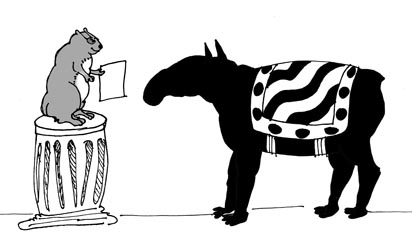 Not having gone really very far into unknown territory, Indigo Animal is pleased to hear this, even though Dame Eleanor has just made an executive decision and they were supposed to be co-leaders.


Dame Eleanor continues, “Let’s review the list. We’re stuck with Neville Hare. Orange Bearcat insists. Actually, a number of rodents dropped out after they heard he was coming.”

Looking at the list, Indigo Animal feels that they will need two very self-assertive animals who can stand up to Neville Hare. 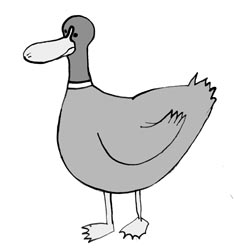 “I think we should pick Leonard the Mallard,” Indigo states forthrightly, trying out the role of co-leader. “Leonard may have a lot to learn about lawn statuary, but he is naturally self-confident. Maybe it’s his background in migration.”

“Oh, Indigo—I am so glad you agree with me. See, I already have him on the list! So now I will put forth my candidate—Alonso the Pig. He is also very new to our field, but pigs are highly intelligent. He won’t be intimidated by Neville.” 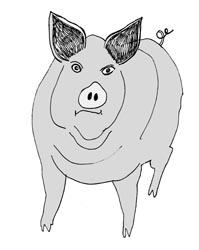 “I have conversed with Alonso and I agree with you, Dame Eleanor,” says Indigo. “He can sniff out a bogus argument a mile away!” 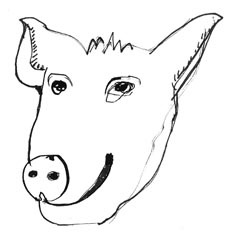 
Having quickly come to an agreement with Indigo about the roster, Dame Eleanor moves on to the topic most concerning to her—safe travel. Producing a glossy brochure, she says, “I’ve purchased a travel package through Animalair. Have you heard of them?” 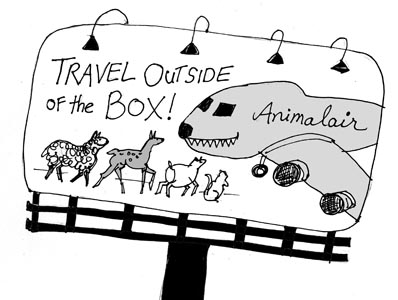 “Right!” barks the marmot. All we have to do is be packed and ready the morning of departure! They’ll provide a van and pick us up right in front of Orange Bearcat Hall. They’ll drop us off next to the Flying Tigers terminal. And Animalair has separate areas for predators and prey. 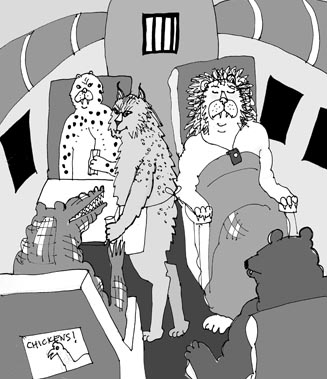 So we all can relax in total safety and comfort!” 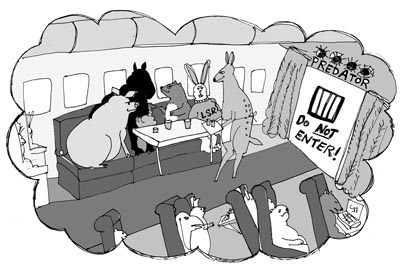 Here, Dame Eleanor pauses and with a little cough indicates a new topic. “Indigo Animal, I am really pleased that you have been appointed co-leader of the summer session abroad program. At first I was taken aback. But Midori Frog felt very strongly about it. And then Bearcat gave it his stamp of approval. However, I feel that I need to be especially attentive to Neville Hare. He will be reporting back to Orange Bearcat, I am certain. So Neville and I will be seated together in Rodent First Class. 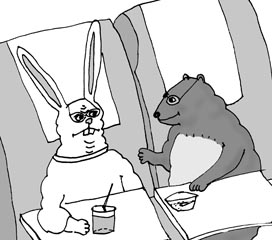 It only cost a little more. And the seating they have for larger animals farther back in the plane is more than adequate. I know it is a stretch to put you there, but it is the only place for Alonso and I am concerned about how he might react if he and Leonard are seated by themselves. Really, Indigo Animal, your presence can be so reassuring.” 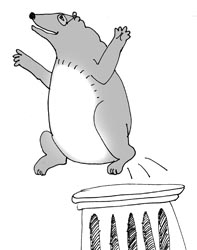 Dame Eleanor jumps spryly from her column, a sure indication of the meeting’s end.
“Aren’t you excited, Indigo? Now get a good night’s sleep! The van arrives at 7 am sharp!”

Rue Harrison is an artist, psychotherapist, writer and contributing editor for works & conversations.