I met painter Diane Ding thanks to having discovered her husband's (Wanxin Zhang) compelling work. On my first visit to Wanxin's large studio, at one point, my attention was drawn to a particularly striking painting. What about that one? I asked, pointing.
"Oh, it's mine," Diane told me.
"Do you have more?" I asked.
She did - lots more. And here are a few of them.
Like her husband’s dramatic ceramic figures, Diane's portraits are masterful and pull one into unanswerable questions. One can't help wondering, "What's the story behind the portrait?" Her paintings are like doors, if only one knew how to step through them. Whatever might be lost in translation, in terms of cultural content, one feels that at heart, these faces speak of matters we all can recognize.
Excerpts from Diane’s notes about her portrait series add dimension: “I grew up in an artistic family. I started to draw early and naturally. I was soaked in art books and never got tired of looking at my favorite pieces. I talked to the images and sometimes drew on them, and made up stories about the characters.” And Diane’s mother, an accomplished artist, taught her calligraphy from early on.
At the age of fourteen, she became the private student of Li Xiushi, one of the top classic oil painters in China. “It was a big deal,” she writes. At college, following his advice, she pursued a double major: traditional forms of painting and oil painting. “I caught my college professors’ interest early by breaking an unspoken rule. I started doing drawings of classic statues and objects with Chinese ink; it was unusual at the time for a young art student to draw based on her own feelings and creativity.” [Ding's painting Fish Boy, 48" x 32," first caught my attention] 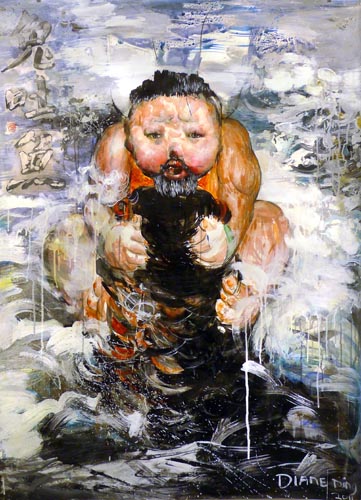 After graduating from the Art Institute of Harbin, she was the head art designer for the Daily Cultural News in Changchun, China, for six years. In 1993 she immigrated to the US with her husband, Wanxin, and set up a teaching studio. As she writes, “Because my art students varied drastically in their personal interests and aspirations—some wanted to learn fashion and become fashion designers, other wanted to become skilled at fine art—I quickly learned how to adapt lesson plans for each student. At the same time, I was able to learn more about myself and expand my own skills as I taught Chinese painting, classic oils, fashion design, and other styles of art.”
Most of the paintings in Ding’s portrait series were done between 1999 and 2007 and are rooted in her family life in Harbin, a city of over 10 million in the far northeastern part of China. In Harbin, Russia’s influence was part of local culture and extended to architecture, movies, music, ballet, fine art, food and even eating habits. Both of Diane’s parents spoke some Russian.
Her mother was a wonderful storyteller and shared many old stories from both paternal and maternal families. “I always wanted to hear more,” Diane writes. There was the story of her mother’s big brother, for instance. “He had an amazing life. Growing up in the 1930s, he was highly educated, knowledgeable in many fields, spoke many languages—including Russian and Japanese—and was a handsome young man. He couldn’t refuse his arranged marriage, as was the norm in society at the time, but dreaded it as he had a Russian girlfriend he really loved. Soon after the marriage ceremony, he ran away with his Russian lover, and never went home again. His legal wife remained with her parents-in-law her entire life, living alone with the fake marriage until she eventually passed away.” 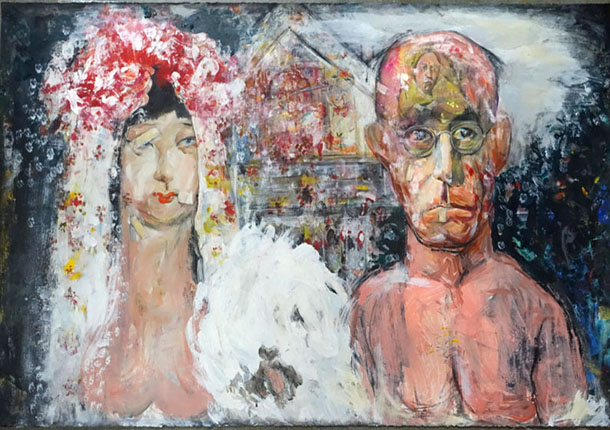 When her mother first told this story, Diane was a child, and it made her very sad. Why would people force marriages? Why did social status have to be held above love? Why did race and ethnicity matter? As she writes, “I thought my uncle was the most romantic man, and his legal wife had the most depressing marriage story. While I admired my uncle’s courage to elope for his real life, I also felt deeply sympathetic towards his wife who remained alone and isolated until her death. These people formed images in my mind as I heard the story again and again. What were their lives really like? What were the real mysteries? Why did the wife choose to wait until her death? Was it really a choice for her? Who were the real victims? What made the real sacrifices? What did my uncle’s Russian lover look like?
“As I grew older, I understood more. But deep down I have always been confused about these questions of life. Moreover, I thought of more questions on this subject after I moved to the US. People around me here come from many different countries; they all have great stories about their marriages and loves and lives—some sad, like marrying for a green card, but others are rich and romantic. As expected, my mind began forming images of all these stories.
“I started doing this portrait series in 1998 with really no intentions. I called them the Secret Garden Series mostly because I just wanted to give life to the images in my mind, to portray my life experience and imagination via my art. 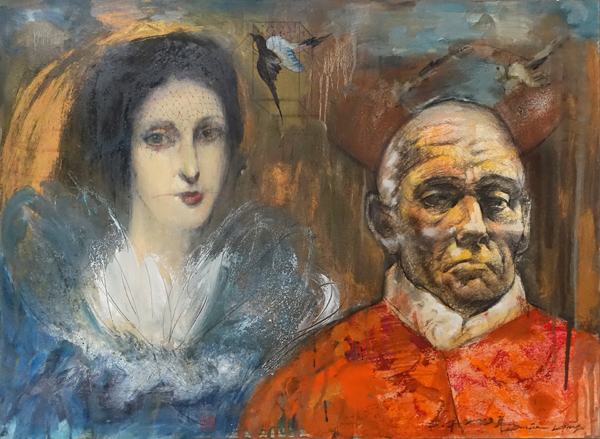 “For me, these are the secret lives of people around me, some with a bit of sweetness, some with powerful spirits, others with just hope or disappointment. They have no distinct, clear messages to share; they’re indescribable in words. I don’t know clearly what I would tell people about this series. But I know we’re all one family in this world, despite Americans being from all races and backgrounds, and despite people from various countries believing they’re so ideologically different.
“Humans are imperfect in many ways, but we are, deep down, one and the same; we share blood from genes from long ago, and we have no true reason to dislike each other because, as we stand before God, we are all the same. We all want love and peace, defined differently as they may be.
“This series is sparked from my family’s history and my dreams from a young age. When I moved to the US, I was very homesick, and these memories started coming back to me more and more. Painting this series was a healing practice, a way for me to concentrate my energy on the details of my life and past. 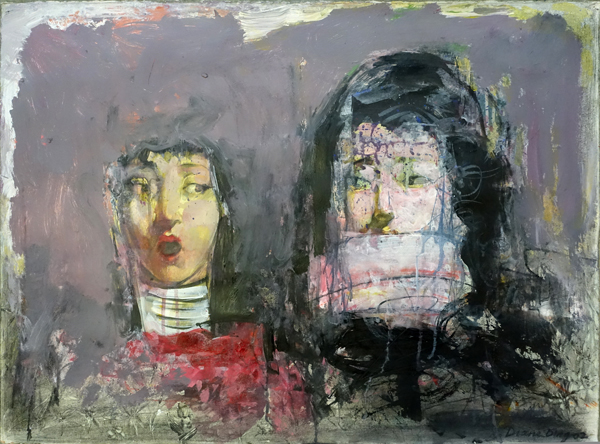 “For me, there are two kinds of recall. One is involuntary, and one is a form of subjective wishing. My portrait series is a mixture of these two types of recall—all of it solidly rooted in my family background—and it’s what connects the pieces to one another.
“I do my art for myself and hope it can touch and spark my imagination and mind in new ways, and only then do I hope the work can spark reactions in others to inspire a love of life and of life’s mysteries.”
One can only hope that people will have the chance to see Diane’s work in future exhibits, and that more paintings will follow. —R. Whittaker

so interesting person. I was in china several times in the 1980 and became interested in writing Chinese.
Diane does not push herself as a painter.

the article mentions nothing about the appearance of Grant Wood's painting "American Gothic" in the second slide....(or the dog between the couple)...very curious

I like how Diane overviews human life..Her paintings are retelling the true stories.Thank you for this inspiring article.

Diane Ding's portraits capture not only the subjects' spirits but their truth as well.

Diane's sentiments on the commonality of human aspirations are beautiful.