The jagged boulders at the bottom of the snow-filled gully weren’t fully covered by the snow. They lay in a jumble, piled there by the receding glacier from the last ice age.  There was plenty of time to fully regard them as he accelerated towards them, approaching some terminal velocity, down the ice chute into which he’d been unceremoniously pitched, headlong. His mind didn’t think about them, really, these angular blocks, black against the snow’s white. It merely held them, turning the prospect over, like some mild curiosity.

This fall wasn’t like most. Usually falls were over before one knew it. Generally, they were merely sequential photographs - one of standing or climbing, next of lying down or dangling from a rope - the actual fall skipped over by the mind. This one, however, had the curious feature, the luxury, of lasting long enough to actually exist.

The trip had started uneventfully enough. Shouldering heavy winter packs, they’d skied north along the top of a remote Sierra ridge toward Yosemite, high above the headwaters of the San Joaquin, California’s longest river. They could have been in China, though, so poor was the visibility rendered by the storm. Snow started falling silently in flakes, then clumps big enough that one could hear them thud dully against the parka’s hood. Breath came in icy, billowy gasps in the high altitude and sub-freezing December air. 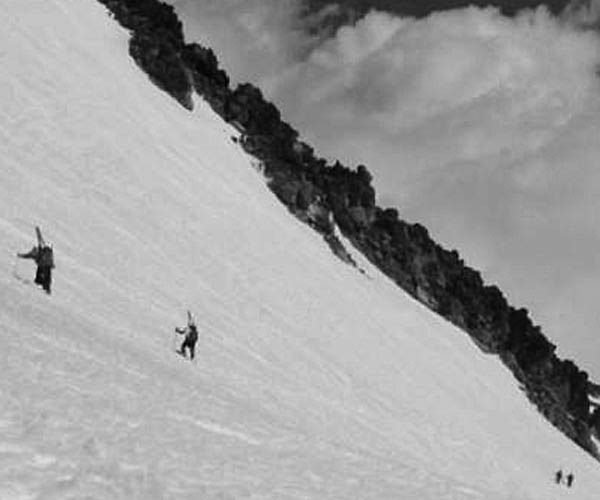 The fall started humbly enough. The metal edges of the skis had slipped on a patch of ice, then bit suddenly, as they sometimes did. This slip and stop of the skis unexpectedly pitched him over, the momentum of the pack swinging on after the ski edges grabbed. He landed on his back like a gangly insect. It was there that the one small, inconspicuous piece of bad luck made its brief appearance, then disappeared into the heavy cloud cover: This particular icy patch lay in a slight dip at the top of a steep gully, a wrinkle that fell off the side of the ridge. The wind had blown its snow into an icy glaze. It was hard, and it was slick.

The smooth nylon of the pack slid swiftly over the ice, picking up speed with him strapped atop. Before the danger was ever seen, the skier was a helpless passenger. He’d lost his skis and poles early in the struggle against the descent, flicked away by the mountain. He had nothing now to slow the fall. He sped downward, hundreds of feet, towards whatever was next.

He managed to get himself oriented feet first, hurtling down this long, narrow funnel, facing the approaching end. The crash was a fait accompli. There was nothing to do but watch. His mind wandered to what damage would come after.  Of course, especially with the 70-pound pack, nothing could diminish the impact, break the momentum driving into the gray heap of talus.

Then, a curious occurrence: a lump of stone protruding through the ice, the progenitor of the angular boulders below, launched him into the air—not high, not far, but enough. The impact of landing punched him through the icy glaze and into the softer snow beneath, aborting the descent eighty feet above the angry serrations below, which had now lost their malevolence. Blood mingled with the snow.

His companions took a half hour to reach him, kicking steps through the crust, using their poles for balance. His gear had spilled out of the bottom of the gully, onto the rocks. The skis were all busted up, of course, the poles bent and twisted. The next day the skiers made their way back, through the heavy snow and howling wind—he on the broken shards of his skis.

They made it out just as the heavy winter night was deepening the omnipresent grey to black. With all the passes closed by the storm, they had to drive south around the end of the Sierras then head north to home—south through Bishop, Lone Pine, Mojave, Tehachapi, Bakersfield—then north, rejoining the San Joaquin River in the Central Valley, the valley of the San Joaquin. They paralleled its course for a hundred miles and continued, as the river swung west, rolling into the delta, then the sea.

Rick Fairall is a hiker, skier and outsdoorsman - the California Sierra Nevada range a favorite source of rejuvenation at any time of the year.

Eloquent, provocative, and leaving me with questions. Just like life. Thank you.

What were his thoughts when it was all over? How blessed to have survived.

Beautifully written. My parachute opened badly one time, it's twisted lines putting me into a spin. When I stopped the spin, I was dangling from a partial tangled chute over which I had no control and dropping at an alarming rate. At that point I became only a spectator. I could see my fellow jumpers on the ground, boats leaving wakes in the lake I was aiming at as they raced toward me, a tangle of buildings in my path I might smash into...but I felt nothing. I was a disinterested observer, just a recording device. I smashed into the ground just a few feet from the lake, hard enough to knock me out for a moment, but surprisingly unhurt. A ... curious experience experience.

Great writing ability to bring us, the readers, into the energy flow of each event ~ with the exception of the ending. It is so abrupt, I found the entire story aborted because of it. At first I said, "WHAT???" Then I felt discouraged, like I had been left hanging off one of your cliffs. Also, there was no mention of your physical/mental/emotional/spiritual condition when your friends finally reached you, nor what you were doing during that gap, nor your friends' experiences while looking for, then finding you. I feel this is just a skeleton of a good story that needs more skin and bones, muscle and soft tissue.

I think this is perfect. It so clearly illuminates our place in the universeâ€”precarious, yet at one and interconnected to everything and everyone.

I enjoyed the story but it's short. I know that is intentional but I could visualize everything in my mind, which is cool. And notably I live under these peaks myself at a high elevation and love to hear local stories.

"Blood mingled with the snow" is so powerful.

Hah! Been on a similar trip in winter with friends. I, the largest of the group tried to ski over a small gully but ended up facedown, 50lb packing top of me. My friends heard noises and feared for my health?! When they pulled me up, I was laughing hysterically at myself and also that I wasnâ€™t injured! Another friend had snapped the end off one of his skis hurrying to assist me. We repaired and trekked on to an overnight (COLD) blizzard after a day of telemarking on pristine slopes. All was silent in the way out, including a closed Interstate 80 and a snowed-in vehicle (mine). Eventually CalTrans snow plows allowed to reach the highway and make our way home. Moral of any story; â€œcount the costâ€. }:-o anonemoose monk

Richard, I do not know if "what do you think", is a question from you, the author, or Works and Services as a project of Service Space. I experience it as an odd question, after feeling as if I had my version of the experience you had, because of your unique quality of expression in relating it the way you did to the reader. I wanted to sit and be with the relief, the sensations, the wonder of it all, the physical and emotional elements of my responses to your telling. I considered it a distraction to be asked to go to the mental element to describe what I thought. I was not tuned into my thinking as I was feeling into the experience. I was focused on what I was feeling. And for me to attempt to comment with what intellect I have upon something beyond your words, that your words allowed access to, takes me out of the experience of appreciating in the moment, listening deeply. Thank you.

Harrowing! Reading feels like participating in this harrowing ride.

It left me wanting more. I like the style of the writing but the story is too short. I didn't hear gratitude.

Thanks for sharing this Richard! I think only in association, that perhaps in a period of clear thought some of the rich phrases might be reduced; reduced to the just essential descriptive richness.