On a cold, clear morning in January, artist Lucy Clark stood on a dirt road facing the main plaza of a tiny Indian pueblo in north-central New Mexico. The North Carolina-based potter had traveled to San Ildefonso, home of her creative idol, the late pueblo potter Maria Martinez, on this final day of a three-week workshop she was completing at nearby Ghost Ranch.
As she stood watching Native American dancers in full regalia performing to the beat of traditional rhythms, her attention was drawn to more drumming and chanting resonating from another plaza in the opposite direction. “Suddenly,” she says, “I found myself standing between two different groups of tribal dancers. I didn’t know where to direct my attention. I wanted to watch them both at once, but couldn’t.”
So she closed her eyes. And listened.
“That moment, with eyes closed, listening, feeling, absorbing the sounds and vibrations of each group feeding off the other, mingling with the wind and the sun, and raising a vibration from earth to sky,” she remembers, “it was very powerful for me.”
As the music from the two groups washed over her, she was suddenly struck with a vision of intertwining strands of DNA coming together to create something new out of that which came before. “It brought home for me how important it is to build on the stable foundation of honoring the past. And yet, something new comes out of that, is birthed from that. It all tied together for me. The level of commitment they have for their tradition, the power and the reverence, it was all there,” she observes. “They’re so connected to that earth, that land, that place because of the generations who’ve come before, and you feel it. It’s sacred ground.” 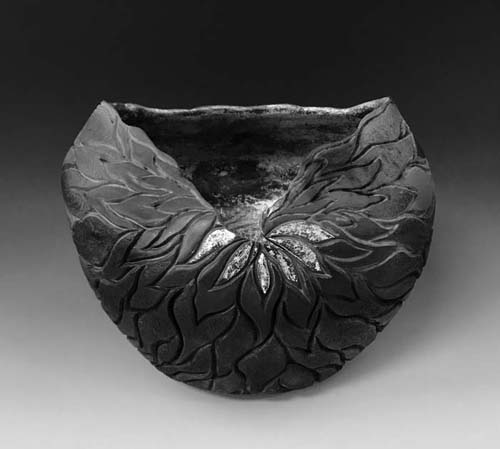 Building on tradition was the goal of early 20th-century potter Maria Martinez when she and her husband Julian resurrected the authenticity of the lost prehistoric art of black-on-black pueblo pottery. “I have always created in the tradition of the pueblo potters,” states Ms. Clark, “so for me to finally be in the place where Maria and Julian Martinez had lived and worked, and dug clay and fired–how could I miss this opportunity?”
The day trip to San Ildefonso was organized by the staff of Ghost Ranch, the educational retreat center at the site of Georgia O’Keeffe’s home and studio north of Santa Fe. Ms. Clark came to Ghost Ranch to study with Tewa potter Clarence Cruz, a revered instructor of traditional micaceous hand-built pottery. “I could’ve taken a hand-building class somewhere else, but I wanted to go to the source,” she recalls of her first-time visit to New Mexico. She drew inspiration from his commitment to his art–“Clarence has dedicated his entire life to his craft”–and from his process: the workshop required that they dig their own clay from the surrounding hills, process it to remove impurities, and fire their work in an open pit, a centuries-old technique. “I had always felt I was rushing to complete a piece,” she explains. “Ghost Ranch taught me to slow down, that every aspect of the journey needs to receive as much focus as the end results– to give each piece all the attention and love it deserves.”
Her workshop expenses were funded in part by the newly inaugurated Betty Taylor Award for Emerging Artists, co-sponsored by the Arts Council of Henderson County, North Carolina, and the county’s Community Foundation. Ms. Clark is the award’s first recipient. Recognition of her talent has grown rapidly since she first discovered her passion for clay and its centuries-old tradition in the mountains of western North Carolina. A native of West Virginia, Ms. Clark and her husband had been living in northeast Florida where she had a busy career as a massage therapist. One of her clients allowed her to use a North Carolina mountain home as a weekend retreat. “When I woke up that first morning, looked out and saw those mountains,” she recalls, “I said to myself, I remember this. This is home.”
Inspired by the abundance of craft pottery in the area, she returned to Florida and began taking classes in coil-built pottery with renowned clay artist Worley Faver in St. Augustine. “I had always thought I’d be good at working with clay. With that first pot, it was like a light bulb went on and I just kept going.” In the ten years since that moment, there’s hardly been a day that she hasn’t had her hands in clay. 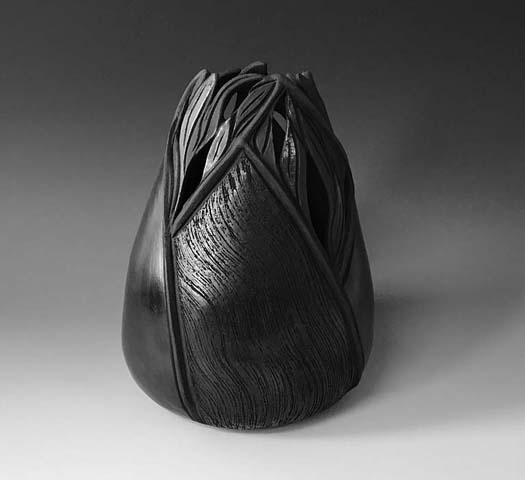 After Ms. Clark made the conscious choice to put her art “front and center,” she and her husband relocated, in October of 2014, to Cedar Mountain, North Carolina, where she established a studio. It’s a place where she could live simply, allowing more time for her work, surrounded by the creativity that first inspired her. “I don’t want my art to be sacrificed to time constraints,” she explains. “It’s about being more expansive and taking down any boundaries between me and the work”
With their soft sensual folds and undulating curves, Ms. Clark’s graceful creations are often compared to Georgia O’Keeffe’s flower paintings. It was a style of work that came naturally to her, so it’s appropriate that she would eventually find herself studying in the same landscape that had such a powerful influence on Ms. O’Keeffe’s life and work. “There’s a special energy when the light and color of the sky play off that eroding desert landscape,” she recalls. “Everything has a rounded softness and that’s the essence of my work. It’s why I related so strongly to that environment. There’s nothing hard-edged in my art.”
Ms. Clark brought her experience of New Mexico back to the gentle hills of her western North Carolina home where she has been working on a new series, combining and intertwining, like strands of DNA, the clay traditions of mountain and desert, bringing forth original work that is both powerful and unique. From that moment of epiphany, when she recognized the importance of building something new upon the foundations of that which came before, her work continues to pay homage to the history and the spiritual essence of traditional pueblo pottery without appropriating or otherwise replicating the Native American designs she holds so dear. The results of her most recent efforts can be seen at her latest endeavor, a new gallery/workshop she established at 51 West Main Street in downtown Brevard, North Carolina, or online.
“It’s not so much that I’m searching for answers,” she explains. “It’s that I’m looking for the appropriate questions to ask: ‘What takes me away from my center? Where do I want to go with my art? How do I need to evolve?’
“The clay–that formless ball of earthy goodness—calls to me, asking, ‘What are you going to do to make me proud?’ Each day, I’m promising the Earth I will do everything in my power to make her shine. I hope I do my best.”

Having spent his career working in support of the visual arts, Tom Madison continues to celebrate the voice of the artist as a writer living in the mountains near Asheville, North Carolina.  t.brant.madison@gmail.com

Lucyâ€™s story resonates with me !! What a talent and continuance of the Maria Martinez influence .
Stunning story !!