The first Light Vessels evolved from optic experiments I conducted in 2005, using clay positives. The results were so satisfying, and the renewed relationship with clay so rewarding, that the experiment became an ongoing series.—Phil Dow, from his website.

I first saw a couple of Phil Dow’s cast acrylic sculptures maybe 10 years ago. My attention was immediately drawn to them by the play of light in them accented by their complex surfaces. I asked how he’d gotten involved in casting acrylic. “In the beginning I was a clay artist,” he said. “Then I had a chance to study with Freda Koblick.” I hadn’t heard of her, and he explained that she was a pioneer in working with acrylic in the ‘50s, long before it had gained popularity among artists as a medium for sculpture.
Working with cast acrylic has its challenges, he told me. No matter how he cut, scratched, gouged and sanded the surfaces, he wasn’t able to arrive at anything that pleased him. And then, pointing to one of his bowls, he said, “There’s no way I could get these surfaces just by working with a piece of cast acrylic.” 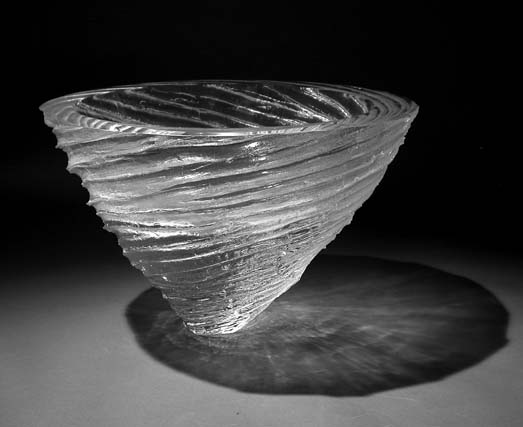 In his quest, he found himself turning back to clay. “I always had some around,” he said. And he realized he could use it in making his casting molds. Taking advantage of clay’s plasticity and receptivity for surface manipulation allowed the creation of his complex surfaces.
Another element in casting acrylic that adds dimension, he explained, is that when the piece first comes out of the mold, its surface is opaque. The process of finishing (polishing) the acrylic advances from opacity through translucency to the transparency of glass—and there are endless choices in handling that. In places where the finish is polished all the way to transparency, light comes into the piece and scatters. Translucent areas allow some diffuse light in while also retaining enough surface definition to define volume and set up reflections. These bowls are perfect forms for this complex play of light.
When I asked Phil what he was working on, he showed me a couple of exploratory pieces he’d made by welding small pieces of copper together. The piece you see here was sitting on a shelf in his living room. As we stood looking at its shadow play, Phil said, “I’m still working with light.” —rw 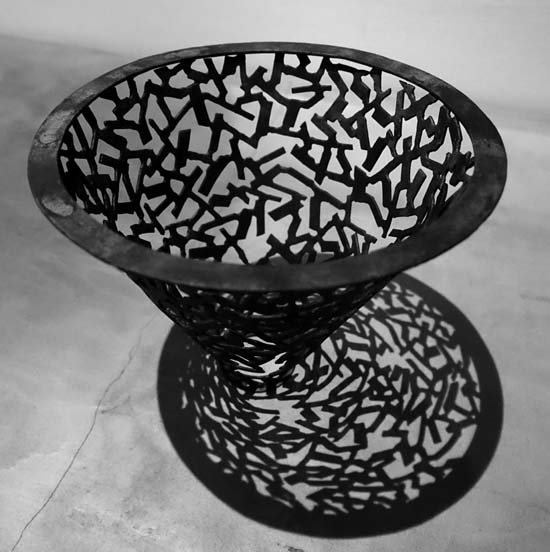