May 7th. (Curchack sends monthly messages to her subscribers.)

The holiday that catches my eye in the month of May is on the 28th - the founding of the Sierra Club in 1892. The Sierra Club has been a significant frontrunner of environmental activism for well over a century and deserves grateful recognition, but my association in the moment is a recent talk I heard by Michael Brune, executive director.

Acknowledging the staggering environmental challenges we face, Michael chose to bring attention to the ways “the tide is turning.” City by city by city - over 100 now - mayors and city councils across the country are making a commitment to transition to clean energy in the next couple of decades. New York City just announced their resolution a few days ago. When asked whether we could count on these cities to follow through, Brune’s answer was realistic: No, but as environmental pressures inevitably build, the incentive to follow through gets stronger. He also observed that environmental groups are cooperating like never before.
It’s a start. When the tide turns, it’s slow at first and then gains momentum.  "Stay hopeful, stay engaged,” was his message, and it was good to hear.
Alfred Brownell is a 2019 recipient of a Goldman Environmental Award for his grassroots organizing work to stop land grabbing and rainforest devastation by palm oil companies in Liberia. Currently living in exile in Boston, for his and his family’s safety, he was an imposing figure in his African robes behind the speaker podium last week at the Opera House in San Francisco.  When the well-meaning audience interrupted his speech to applaud, several times, Alfred lowered his head, glared and said,  “Don’t clap, act!”  He also said, “No act is too small. All are gestures of bravery.”
Again, good to hear, even the chastening.
One more speaker: at 8 AM last Thursday, David Brooks, NY Times editorialist and author, spoke at Copperfield’s in Petaluma. He described our culture as one mired in acquisition, individualism, polarized politics and one desperately needing to shift to a moral lens of contribution, connection and community. The changes will take root in the neighborhoods, he feels, with the crucial power center being at the tip of the shovel where the actual work is being done. I thought immediately of Daily Acts, Petaluma’s admirable sustainability non-profit.
Another idea that stuck with me from the Goldman Awards was Al Gore's declaration that our best sustainable resource is our human passion to change and grow. Identity is not a static thing; it’s how we act in the present moment, how we adapt and learn to live in a changing world. I am living proof of this: I went through most of my life relatively indifferent to the state of the world, exhibiting nothing like the keen attention and responsiveness I feel these days. Part of the change was having a grandchild and a tangible investment in the future. Part of the change was being drawn more deeply into Nature and ecology through my camera, and through mentors like Joanna Macy, Thomas Berry and a host of other Earth-loving people whose thoughts and quotes put in the calendar. Part of my transformation came through collaboration with Daily Acts. Their commitment is to facilitate every individual’s potential to become more of who they are through community. This was a strong support for my late development as an artist and activist.
The butterfly image is offered as one of Nature’s best examples of transformation, shedding one identity to take on a new one. The tidal images are to remind us of the tides - how they do turn, slowly at first, then gaining momentum. 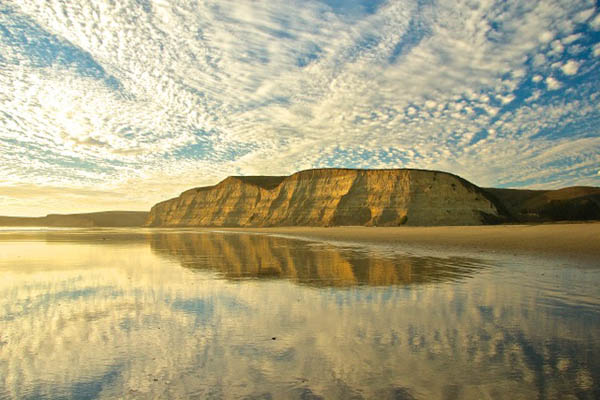 Photographer Leslie Curchack produces a yearly calendar, "In Love with Earth." You can contact her at lesliecurchack@gmail.com or at 707.765.0300