Time Did Not Exist At a summer retreat I’ve attended over the years, after our meals together a quiet listening space opens as we all sit together silently. This is the time for individuals to share their experiences from the day’s activities—the appearance of a new question, a moment of insight or fresh impression. One memory stands out indelibly from several years ago. It took place as silence descended during our last meal together, breakfast on the day of departure.
Michael was one of the out-of-town participants. He’d arrived seven days earlier in Santa Rosa late in the afternoon on a flight from Seattle. But somehow, our transportation team had bungled their responsibility because no one had been there to meet him to drive him the 17 or 18 miles to our retreat center. All through the entire retreat none of us knew this had happened. Michael hadn’t mentioned a word about it and on the morning of the first day, he was there at the sitting with everyone else.
Now it was the morning of the last day only a few hours before everyone would be departing. Breakfast would be our last meal together. And as the meal was reaching its conclusion the customary silence had descended. After some minutes, Michael spoke. At first, I was shocked. Not only because what he was sharing was an account of having been forgotten at the airport, but also because no hint of recrimination was present. And then, as his story unfolded, I thought, “This should be written down.” Later I asked him if he’d be willing to write an account.
Three or four years had passed and I’d forgotten my request when I saw Michael again. There was something he had for me, he said. It was the following account. - R. Whittaker

I find myself working with friends in another state from time to time. I arrive at the airport, make a phone call and someone drives to pick me up. It had worked well for several years, so I had no reason to think something different would happen this time. I called the number and no answer. "Okay, they’re busy," I thought. "I’ll wait a while." Forty minutes and three calls later a sense of unease had arisen and a clash of feelings.
After another wait in the spirit of Robert Bruce who watched the spider continue its efforts at spinning its web, I tried once again. No answer. At that point, picking up my carry-on bag and pulling another behind—with determination and acceptance as my companions—I set off walking.
First there was the mile and a half back to the freeway. Then a right turn for half a mile. Then another right exiting the freeway and a fifteen-mile walk on a two-lane road ahead of me. ‘I’ll probably be a little late for dinner,’ I thought to myself. It was a pleasant day, if perhaps a shade too warm for carrying one bag while pulling another along behind on wheels not designed for the rough surface of a country road. ‘Country road, take me home…’ sung in my head.
It had been at the freeway, at the sign reading No Hitchiking No Walking where I first noticed how a determination seemed to have entered me—my body, feelings and thoughts—with an energy of indeterminate source. A lightness appeared in my step. My body seemed a carriage containing another form of myself complete in every detail—myself, and yet not myself—and a warm and pleasant feeling ensued. Strange and yet familiar sensations appeared, and a golden glow comprising a complete safety net. My attention was attracted to this new state. At the same time, I became aware of seeing the trash littering the roadside: plastic, aluminum, paper. I was simply seeing it.
In spite of the whoosh of speeding vehicles, sometimes quite close, this self was calm and comfortable, unerring in its force. There was no fear. The "driver of this carriage," whom I could neither see nor feel, appeared unswerving in his (or her—there was no gender) duty. By and by there was even more trash and less room along the shoulder of the road. The cars now zipped by even closer and still no fear, only the vivid awareness of surroundings.
I felt myself onlooker as well as participant as ‘we’ continued along the road, and a bright light shone down upon us—too bright for my eyes to bear.
Time did not exist. Care took the place of fear. Unknowing was known.
As darkness descended and the chill of the night air began to set in, I gradually returned to my usual state. I found myself stumbling along a country road holding my thumb out. Still, there was no fear, no lack of determination, no tiredness, no soreness of leg or limb.
Finally it was completely dark and my journey had become discomforting. I was myself once more, but a little light remained and was being carried inside, the remnant of this miraculous experience.” • 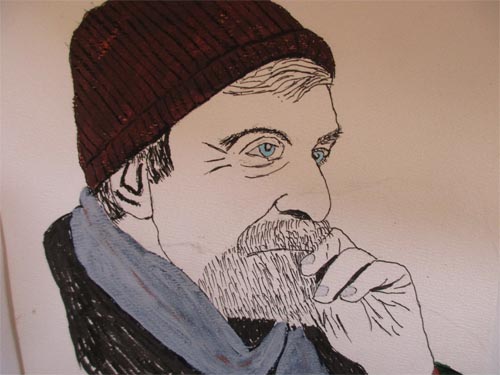 I remember that in the silence that ensued after Michael finished speaking, I experienced a conflicting mixture of feelings impossible to adequately describe. I was sure, however, that I'd heard an account of something real. One never knows when a door to another reality might open.

Kane's life partner sends her bio note: Michael is a philosopher with a hammer and a paint brush.

I've known Michael for years, if anyone ever really knows anyone, and this piece is a nice reunion, spot on , as it were.
On one of these rides from the airport as I was looking out the window I mumbled something, both to Michael and to no one.
It was from a source most of us are familiar with regarding "the Living truth".
I uttered something like,"And that it is here in this poverty.".
Michael responded with, "Both inner and outer.".
I had only been looking at half the spaces "IT" can be found.
This was thirty years ago, as vivid as , now.

Been there, done that. Golden glow is good. For me, luminescent fog. No fear. No curiosity, either, only a patient witness of an unfolding privileged to -- this is significant -- not see, but be in.