The Paddle: An Amazing Childhood Experience During my mid-twenties I became interested in a facet of phrenology—the study of peoples’ heads—their shapes, contours and bumps. I focused on only one aspect: forehead lines, studying, or at least looking at, widely varying patterns on individual foreheads. After looking at a thousand or more, loose categories appeared, pertaining, for example, to foreheads with uneven lines running both horizontally and vertically, indicating, I concluded, an especially challenging essential nature.
I was just guessing, of course, but along these analytical lines I was greatly surprised when visiting my parents in 1967, the first visit after several turbulent years, to see that my father’s forehead was that of a sage. His lines were perfectly parallel to one other, evenly spaced and neatly stacked, top to bottom, with such uniformity that, sneaking glances as we ate meals together, I was deeply impressed. I was also confused, for it had not occurred to me that my father represented likely “sage” material. That he was an extremely responsible and honest man was always clear, but a potential wise man, a sage?
Reflecting in these ways I could not help but remember some of my father’s distinctly unwise methods for disciplining my brothers and me, exercised most forcefully, I was told, with my oldest brother, whose view of our father registered deep contradictions for the rest of his life.
My middle brother, John, was far more capable of speaking bluntly to our father than either my oldest brother or I, as when my father once began spanking him for a real or perceived infraction. Looking him in the eye, John said, “You know you shouldn’t do this. You know I get headaches!”
Surprises such as these came from John’s mouth, but the greatest surprise, witnessed with my own eyes or I could never have believed it, focused on our father’s primary instrument of punishment, “the paddle.” While not a complex object, this paddle was unique in its construction, being designed to inflict noise as part of the punishment. When our father hit us, several thin, lengthy slats, running from the paddle’s tip to the handle, amplified the sound made when the paddle was put to its intended use.
For many years the paddle was kept in our kitchen, on top of the refrigerator. I do not recall what preceded the incident I am about to describe, but it’s safe to assume John had been spanked the night before. Whatever had occurred, after John—age 13, and I, age 11—got off the school bus together and entered our home, he said to me, “Watch this!” 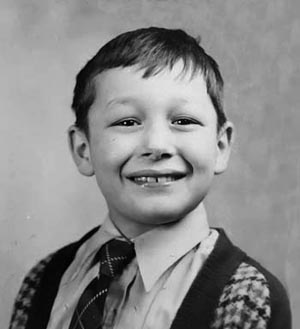 With no idea of what to expect, I followed John up a short flight of stairs and into our kitchen. He reached to the top of the refrigerator, grasped the paddle and wordlessly reversed course to head back down the short flight of stairs, turn and walk down more stairs until we entered our basement. John led us into the furnace room, walked to the side of the furnace providing access to it and opened the furnace door. Looking over his shoulder, I saw orange and yellow coals, with flickering blue flames, like an aura, over them.
What occurred next was all but unbelievable, for John threw the paddle into the furnace! No matter how dream-ladened life is and no matter how much we doctor memories, I know I did not dream this, but truly observed it. My brother John threw that paddle into the furnace, and in seconds it burst into flames! I saw this. I experienced it more than visually, for I was fully there, present, observing and amazed.
To my surprise, the paddle’s absence was never mentioned in our home. But the spankings were over. As if a spell had been cast over our family and finally broken by a miraculous event, we entered a new, paddleless period of family life.
This experience did not lead to a closer relationship between John and I, which flowered much later, but for months I viewed him heroically. Surely our mother surmised that it was John who did something with the paddle. Content to “let sleeping dogs lie,” she must have been both impressed and relieved. At some inner level, our father may have been relieved, too.
John never spoke about this and no one else did, either. But before he died my father, who later turned a major corner with me and I with him, apologized for the spankings, clearly feeling remorse. Not one to hug, my father extended both hands to me after expressing himself. I reached to take hold of his hands as we looked at each other in forgiveness and love.

To learn more about James Opie, see this link from the NYTimes.