Dust Is in the Eye of the Beholder: Wang Yan Kwai There have been painters who were fond of painting horses, although it is a pity that none of the animals in their paintings were able to run. And meanwhile, on the wasteland, lay the remains of the animals which had been exposed to the sun for ages, but when you happened to stop by to have a look at them, you'd see them turn over, leap up and gallop in front of you. Henri Cartier Bresson, a photographer, said that we all are passive onlookers in the ever-changing world, and that our creation lay only in the pressing of the shutter at 1/125th of a second. He said so, and he took up photography. But for some who have also seen this ever-changing movement, there can be other responses. A dancer will dance a dance, a singer will sing a song, or a poet will write a poem.

Man Ray said that he'd take a picture of what he didn't want to paint, and he'd paint one for what he couldn't photograph. It seems that he had found an alternative. How about the rest of us facing this always-moving ground? As long as you wish to have a look at the ever-changing world seriously, not even having to press the shutter, you'll be bound to play a role in it—and then, no matter what happens afterwards, you'll get involved. All sorts of records will be left: fingerprints.

Once upon a time, there was a swordsman who carved a mark on the side of a moving boat to show the location of where he had dropped his sword on the way. The boat with its carved mark continued on its course, carrying passengers as usual, and still continues having missed nothing else ever since. Had that stubborn fool been capable of seeing the situation clearly, his sword would not have been lost in vain.

Look at the various ancient sites and historic relics. Which of them is not a kind of boat with carved marks? Look at any block of wood or piece of stone there. Which of them is not a record of some happening? Had I realized that to create is to decode, I wouldn't have concerned myself about the various kinds of measurements, including those on the shutter, or those on the spectrum, the color wheel, the staff, or on the clocks and watches and other sorts of time pieces, and certainly not those on the side of the boat. 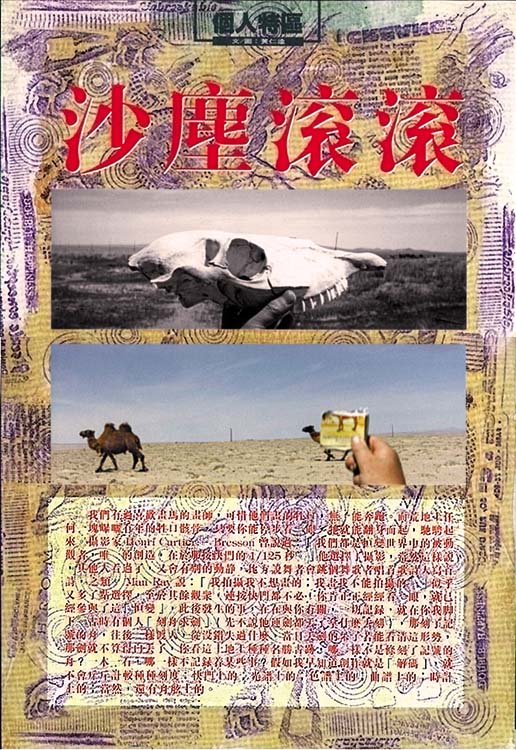 This piece was included in our inaugural issue in March of 1998. We've lost contact with the author.