Becky came roaring up on her four-wheeler, her red hair as arresting as her bright orange road-crew vest. “Excuse me, EXCUSE ME …,” she said, her voice rising, her words arriving long before she did.
I thought I was safe standing on the road’s edge, not invading anyone’s space or property, but she interrupted me as I tried to explain myself as simply a photographer captivated by a weathered cowshed just across from a modest ranch house. “This is our home,” she intoned.
Lady Diana, her companion border collie, had nestled her head in my hand as she lounged at my side, palpably draining the tension of the moment. My other hand cradled the offending camera, which I tried to make small and insignificant, hoping to minimize my apparent offense.
We talked about the rural life, conservation easements and the price of organic milk. She parted with kind words and I felt both chastened and oddly gratified by the honesty of the encounter. I had stepped across some subjective line into her private space even though I was only steps from the public road that bisected her dairy and nowhere near any fence, much less on the wrong side of one. Yet where I stood was home for her and that is not something you want to argue about. 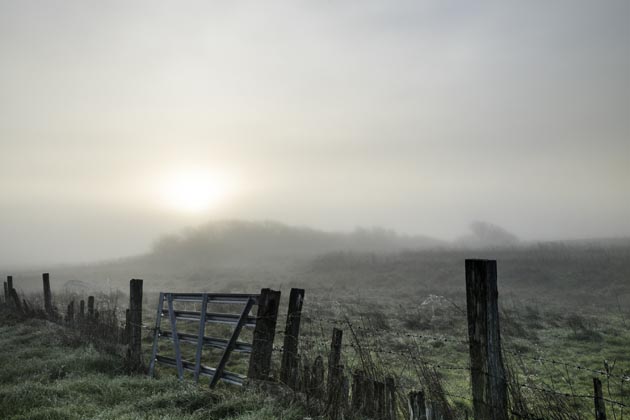 Making images along rural roads is dicey. It means parking on narrow shoulders that can hide steep and soggy drop offs. There exists an imprecise membrane of privacy that you know you are pushing against and trying not to breach. There is the ongoing calculation by any photographer assessing the reward of getting close to your subject and the risk of too flagrantly ignoring multiple barriers meant to keep you at bay, not least of which is respect for the very lifestyle that has nurtured the landscapes you find attractive. Yet going too far can be cathartic. It is akin to finding a boundary and pushing yourself across it just enough to know better what is on the other side. Becky showed me and I felt oddly emboldened by the experience. In this terrain, someone’s home is on the other side.
Months earlier, I had pulled onto a dirt turnout in order to exit my car and get closer to a small watering pond that had just enough glimmer to shine beneath a blanketing fog. I was not five feet from my vehicle when a pickup truck slowed and a head leaned out the window. “Everything ok?” asked a middle-aged man in a baseball cap. I gave a reassuring thumbs-up and smiled inwardly at the neighborliness that can come so naturally in rural areas. Privacy and respect matter out here. So does a natural inclination to help others in possible distress. 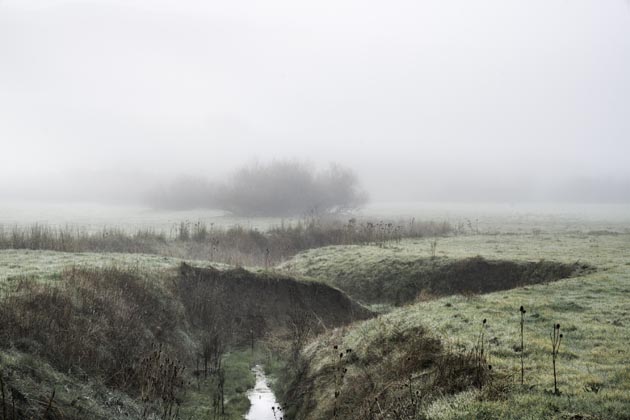 For the past three years I have frequented a 30-mile radius of the small town of Tomales in Marin County. I go there to make photographs and enjoy a place that seems to be holding its own against the spreading tentacles of Bay Area development. The Marin Agricultural Land Trust (MALT), founded in 1980 by two farsighted women, began a program to buy the development rights from farmers and ranchers in exchange for tax and other offsets that would allow families and their heirs to remain on the land in perpetuity. What Ellen Straus and Phyllis Faber did was all about where they lived, but as small actions sometimes do, it was replicated nationally, evolving into something of a movement and method of preserving farming as a viable way of life. Here in Marin, over 50 thousand acres of farmland have been preserved, according to MALT.
Despite such protections, the area cannot and has not escaped the churn of growth in population and prices to its south and east. It sits between a technology-fueled boomtown known as the San Francisco Bay Area and the Pacific Ocean. You do the math.
This place farmers and ranchers call home is a place to go. Estuaries that spill westward to the Pt. Reyes National Seashore beckon kayakers. The ocean calls out to boaters and campers. The narrow winding roads are catnip to bicyclists and sports car pilots.
It was at first light one Sunday that my rear view mirror filled with the grill of a vintage Porsche, the leader in a parade of similar vehicles stretched behind me like a string of polished pearls. Headlights flashed. I shrugged. The preening parade roared past, shattering the calm of a silent, dewy sunrise. I wondered what it was like to work these roads, hauling cattle and hay or just getting from one end of a large spread to another with RVs, SUVs and Lycra-clad bikers whizzing past.
The appeal for outsiders is certainly part recreation. It also might be a place to get in touch with an inner self. Spas and retreat centers have begun to dot the land. I like to think an unspoken appeal is the most obvious: this is what it actually looks like when humanity and the earth shake hands.
It is the fact that this is “home” to a small population of scattered farmers and ranchers that makes it special. It is not pristine nature. Nor is it concretized housing enclaves, office parks or centers of commerce. It lies somewhere in the middle of that spectrum as worked land that has provided livelihoods for families for generations. Farms and ranches here have signs that boast the use of organic methods and sustainable practices. Produce from here shows up at farmer’s markets throughout the urbanized San Francisco Bay Area.
That is all to the good. What I see as I wander this area is a kind of conversation happening between land and humanity, each making compromises and adaptations in order to thrive. The connection is evident and alive and seems like something we need to get back to. 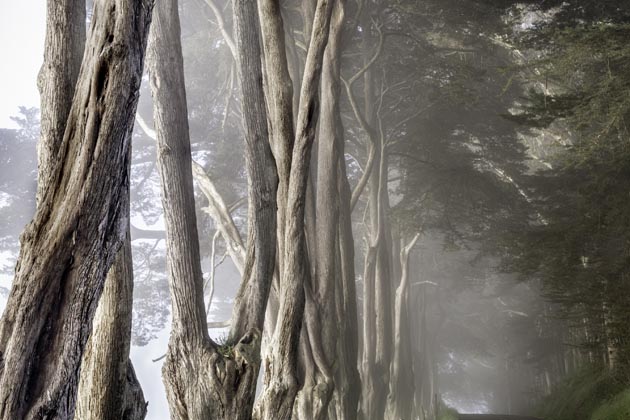 For over 40 years I have traversed the area, drawn to its fog-laced valleys, rocky outcrops and dripping Eucalyptus groves. I call it a land of sticks, stones and bones. But only recently has it become my destination rather than merely a place that was “on the way” to somewhere else–namely the coast.
From the 1970s onward my starting point for regular sojourns here was San Francisco and my destination was the fishing village of Bodega Bay. I could be at the north coast in just a little over an hour, at least with the traffic patterns that existed in that era.
The trip routinely meant stopping in Petaluma for groceries before burrowing into a family cabin perched on a steep sandy hillside overlooking a shallow bay that was home to a vibrant but small-scale fishing community.
It was a rarity to venture inland. Maybe breakfast at Howard Station in Occidental, a walk through the eccentric nursery in Freestone or a drive north to an art gallery at Duncans Mills. It was even more unusual to drive south to Tomales, but it was always magical. Roads dipped through wooded groves and opened onto fields of sheep or cattle. I was a professional photographer at the time, but rarely took any pictures. I think now they were simply filed away in my memory banks and are rushing forward now after some necessary gestation. The “on the way” place has become the destination.
My days in Tomales begin the night before with an early turn in. My alarm is set for 4:30 a.m., but the fact is I don’t need it. I am up and out with the enthusiasm of a child on Christmas morning, doubly elated if I see a heavy fog in my San Francisco neighborhood. It used to feel like a journey, but increasingly I find the relatively empty highway north almost an afterthought. Through the North Bay and diving westward the roads narrow and with any luck I am standing roadside as the sun tickles the eastern horizon. With each trip, I feel closer and closer to home. 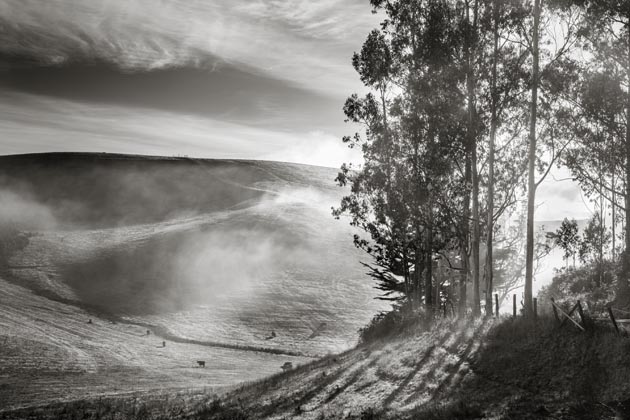 Paul Van Slambrouck is a passionate photographer and retired journalist (chief editor, Christian Science Monitor). Most recently, he teaches a course in film photography at San Mateo College and is a contributing editor for works & conversations.

I enjoyed your article and pictures. I could almost feel like I was standing there with you. I could also sense that you were intruding on someone's space not that it was wrong to take pictures in the proximity of someones home but I think that something comes up when one gets too close. A little conversation helps.

I love your poetic expression of what you see and am deeply touched by the beauty of your photography. The conversation between these two mediums is elegant. Thank you

"Closer and closer to home" rang true to me. I live in Baton Rouge, but have allowed my large city plot of land to revert to nature. I dug a very small pond in those tiny woods and built a footbridge to cross it. Sitting there yesterday evening, the pond covered with petals from the wisteria vines overhead, birds calling their evening messages, placed me in that "home" which also happens to lie steps from the home with the computer, the kitchen and the other stuff that we call life.

Very much inspired, thank you.

Thank you, Paul Van Slambrouck for your poetic way of letting us into the mystery and wonder of what you see. I sighed with some relief at the words â€œhumanity and the earth shaking handsâ€ and â€œthe sun tickles the eastern horizon.â€ Itâ€™s the silent conversation we have with â€œsticks, stones and bonesâ€ that will embed within us all, and will ask of us to return to it, and how lucky we would all feel because of it.