Two, maybe three, years have passed since a friend, Meredith Sabini, called my attention to the work of Harry Frank. I was intrigued when I looked at his monotypes online, but couldn’t fit in a drive north for a studio visit. Then as I found myself in search of material for this issue, his work came back to mind. It was good timing, as open studios were happening in Sonoma County and Harry was set up for visitors. It was a sunny morning when I parked at his address in Santa Rosa, where he’d turned his garage into a gallery. I introduced myself and was soon looking at his work along with a number of others who had stopped by.
In a written note he describes how each print is made. “My images emerge into the light, out of a black field of ink. They are physically created by wiping, dragging and thinning oily ink that has been rolled onto a plexiglass plate. The inked surface is sensitive to any touch or impression so that every mark is recorded. When the image is complete, the inked plate is run through a press, which through controlled pressure, transfers the image to a sheet of prepared paper.” 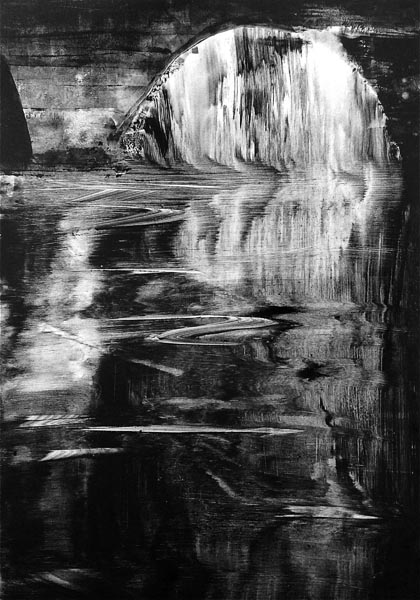 As Harry explained further, there’s a difference between a monotype and a monoprint. He makes monotypes. Each print is one of a kind although, if a plate is heavily inked, sometimes a second sheet can be pulled and is called a ghost image. It will naturally be significantly different from the original in terms of the tones of the inked areas. In a monoprint the image is actually etched into the plate so that multiple prints can be pulled.
As with a lot of other art processes, creating a monotype is a mixture of, as Harry writes, “making and discovering.” The best images are really like gifts—the best ones come off his press alive with, as he put it, “mysterious and luminous qualities.” His image titled Tori Gate is an exceptional example of how the making of an image can unfold as if channeled from some source beyond the ordinary self. 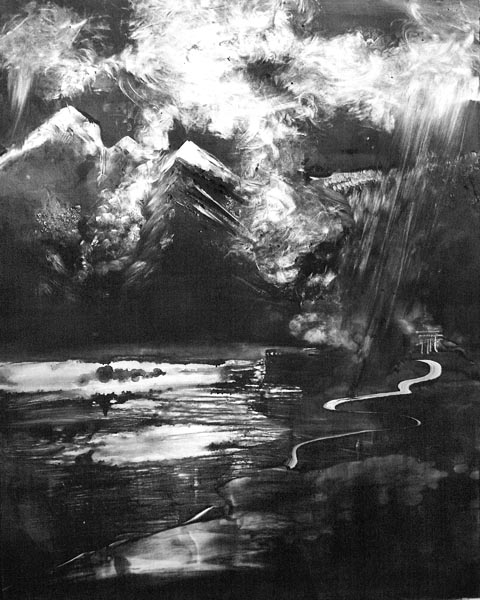 As I was looking around at his work on display, I noticed a hand-lettered sign announcing that he would give a demonstration of how monotypes are made later that afternoon., I asked him if it was something he did on a regular basis. (yes) My question sparked a story. Two high school girls had come in a few days earlier. “They were asking me lots of questions,” he said. “They were really interested in the prints and I started telling them a little about how they’re made. I mean, it was unusual, how absorbed they were.” Harry became more animated as he spoke. “So I asked them if they’d like to see how I make one.” They were astonished at the offer and could hardly believe it when he led them over his press. “I spent about two hours with them,” he told me.
“This was just spontaneous?” I asked. It was. Harry made a gesture as in, it was great!
I was struck by a sense of how rewarding the experience must have been for him. It brings to mind the wonderful question: who gets the deepest pleasure out of giving? The one who receives the gift or the one who gives it? Perhaps much of the time, it’s a question impossible to answer. ­—R.W.

Bio note:
Harry Frank grew up in Brooklyn, NY. He got a BFA from the Boston Museum School (1976) where he studied ceramics, drawing and painting. Later, he did graduate work at the Cranbrook Academy and moved to Sonoma County in 1978. From 1980-83, he was a studio potter making functional porcelain ware. For almost thirty years, he taught art at Casa Grande High School in Petaluma. He learned how to make monotypes in 1998 at a local community college and has been making them ever since. 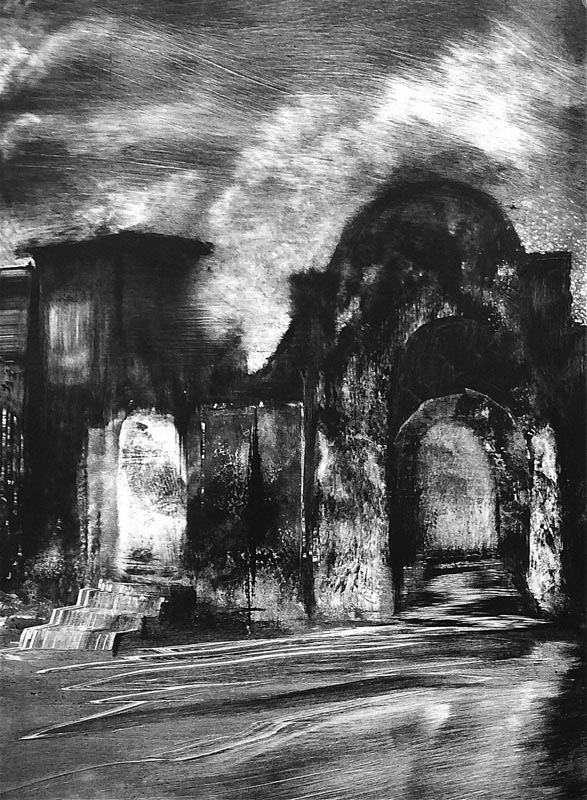 Richard-thank you for your comments on Harry and his work. Harry is truly gifted and applies his talents across carpentry/building, music, and the visual arts. His monotypes are unique and beautiful.
Harry-thank you for the wonderful art that you produce!

Harry was a remarkable Art teacher at Casa Grande High School, Petaluma, CA for many,many years. His talents and kindnesses made a lasting impression on his students and colleagues. He has been missed since his retirement. I can imagine the enthusiasm with which Harry demonstrated the print process to two young and curious minds!