A Letter to Peter Kingsley Over the years we’ve published the work of artist Ladislav Hanka. Something deep runs in the family. His uncle Erazim Hohák’s profound meditation The Embers and the Stars: A Philosophical Enquiry into the Moral Sense of Nature, University of Chicago Press, 1984, is an example. It happened that I’d read the book and, as I was reading one of Ladislav’s meditations, suddenly I was reminded of it. Could the two be related? So when Ladislav, in response to my query, replied, “Yes, he’s my uncle,” I wasn’t completely surprised. Hanka, most recently, sent me the following note:
“You have a way of finding the right connections and publishing them—which I appreciate greatly.  Among those have been the interviews with Lewis Hyde and Peter Kingsley. I’ve had a worthwhile correspondence with Kingsley and now your recent interview with Lewis Hyde got my attention as well. As I was reading his book on the values of forgetting, Peter Kingsley showed up in my e-mails, spurring me to continue that dialogue. You might enjoy what I sent him. —Ladislav”
And I thought readers would find Hanka’s letter of interest. Because of limited of space, I’ve done a light edit. —R. Whittaker 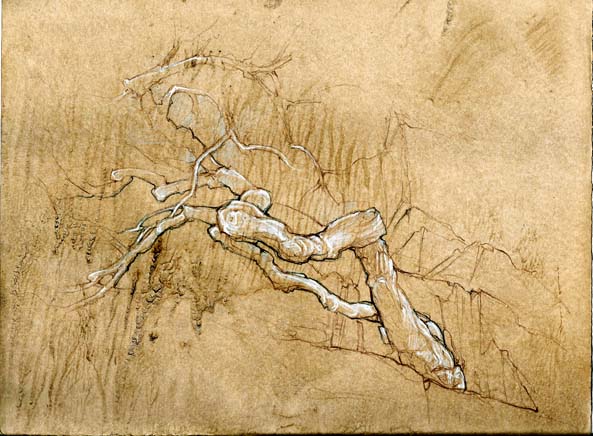 A decade later, my wife Jana and I were exploring the legendary energy vortices and power spots encircling Sedona, Arizona. At day’s end we ascended through the red rocks and rabbit brush of Airport Mesa to pray—the profound calm propelling us into a deep meditative state. Resurfacing, I opened my eyes and there in front of me, lit up in the last rays of the setting sun, I beheld my juniper—the very tree I had drawn a decade earlier in Colorado from my imagination. This was without a doubt one of those postcards from the other side, sent to awaken us from time to time. I reached for my camera and later, when I compared the snapshot and the drawing (that’s the scientist in me, the doubting Thomas who demands incontrovertible evidence), the two coincided remarkably except for one curious detail: the drawing was a mirror image of the photo.
My imagined juniper had not only materialized, but it had been a foreshadowing of things to come, because, as all printmakers know, the plate on which we etch and carve our images, when printed, duplicates the image, but reversed—as if looking into a mirror.
Ah yes, the mirrors we encounter from time to time. We do well to notice, and better to live by them. Better yet to call them to mind years later and remind ourselves continually of who we are and what we are here to do and experience.
Yours truly, Lad
See more at www.ladislavhanka.com

Ladislav Hanka is an artist/writer who lives in Michigan