Even though as an artist I’ve been most naturally at home with tuning into, and attempting to express, messages from the unconscious, my less-than-brilliant earlier career as a graphic designer helped me to appreciate the rigors of exactitude in drafting. I loved the feel of working with a T-square, a triangle and a straight edge. When these instruments became obsolete in graphic design because of the computer with its increasingly amazing feats, I lost interest in the whole endeavor. Many years later I became a therapist, a profession where intuition, tolerance for ambiguity and an interest in unconscious communication are the tools.
However, I’ve often been drawn to the great traditional works of art, such as the art of ancient Egypt and art from the Buddhist traditions, and the beauty of the medieval cathedrals of Europe. Isn’t the yearning to see, and somehow internalize, the structure and balance inherent in these works, seemingly created accordingly to universal laws, one of the reasons so many of us have been jetting around, to the detriment of our planet?
Marney Babcock has carried her interest further than most of us by taking classes on geometry at the Prince’s School of Traditional Art in London. Once the class spent a week in Chartres studying the underlying principles of geometry and learning how to draw the cathedral’s rose window. Since then she has continued her study and is now teaching Art of Geometry classes online through the Colorado Free University.  I recently took one of her classes. 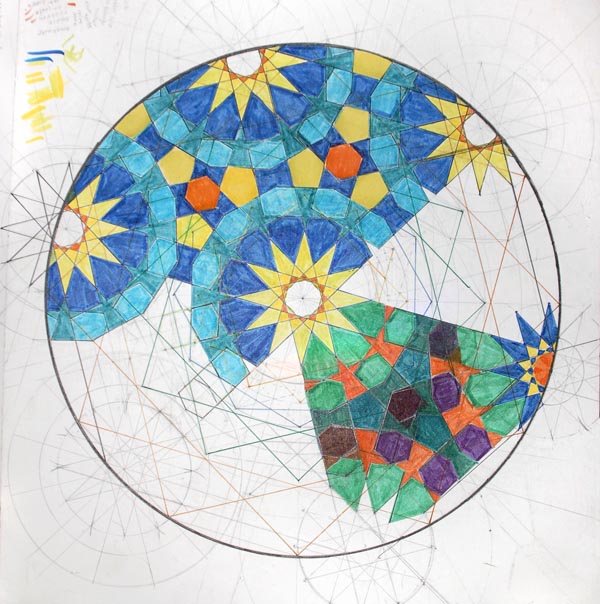 The beginnings of geometry go back at least to early Egypt, and the knowledge of geometry in Greece predates Euclid. Legend has it that above the entrance of Plato’s Academy was written, Let None Ignorant of Geometry Enter Here. Somehow, I think this refers to more than just the axioms we learned in 10th grade!
After taking Marney’s class, I wondered why, in all my studies, I never learned to use a compass. She explained that in traditional geometry one begins with making a horizontal line on the paper and a circle with its center on that line. Then, using only a compass and a straight edge, all the designs you see in a cathedral—its arches, windows, floors, building plan, and buttresses—can be laid out. This is how it was done until the advent of modern tools and, in that ancient way, all the forms were related to each other.
For all of recorded history, and earlier, knowledge of geometry has helped human beings create the structures and patterns that underlie the feeling of stability and symmetry to which we resonate in the traditional arts. And of course we would, because we see the same geometric principles made visible in our galaxy, in plants and flowers, and the water spiraling down our bathtub drain.
In a recent video made in celebration of Prince Charles’ 70th birthday, Professor Keith Critchlow, a proponent of the benefits of continuing to engage in the hand-on-paper-with-compass work of sacred geometry, said, ”Traditional geometry is done by the human hand attached to the human heart.” Even as a rank beginner in this study, I’ve already experienced a taste of this. —Rue Harrison

Rue Harrison is a contributing editor for works & conversations, an artist and psychotherapist, and author of Indigo Animal