On the Work of Danae Mattes:A Gateway into Perception
by Richard Whittaker, Feb 1, 2021 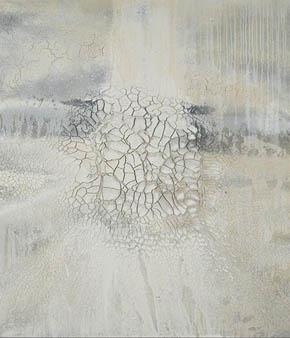 The first piece of art I say by Danae Mattes was leaning up against a wall behind three sculptures by her husband, Stephen De Staebler. What a wealth of treasures I was to see that September day, maybe thirteen years ago. I’d come to interview De Staebler, an artist of great power and depth, but Danae’s piece (Wetlands II) held its own. “Whose work is that?” I wondered, pointing. (The informal photo from that moment appeared on the back cover of works & conversations #18, a luminous issue of which only a few copies remain.) That same day, the following exchange (not included in the published interview) took place just as I turned my recorder on. Finding it now, as I’ve been thinking about the work of Danae Mattes, is serendipitous; it sounds just the right note for these reflections on her work. 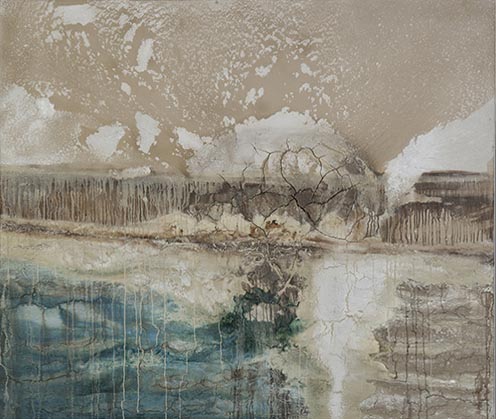 Stephen De Staebler:  You told me you did pottery in college out here, right?

RW:  A little, yes. I got my first taste in Claremont, at Scripps College.

De Staebler:  Was Paul Soldner there?

RW:  As a matter of fact, he was. My girlfriend took me to the pottery studio one evening and there was Soldner puttering around. She put some clay on a kick wheel and was showing me how to begin. Then Soldner came over and gave some pointers. That was long ago, but I still remember it. There was something graceful about Soldner.

De Staebler:  I think I know what you’re talking about. The first time I met him, he kind of floated across the courtyard [laughs]. So you had sort of a conversion experience?

RW:  Well, it made a deep impression that led to me learning how to throw. When I moved to Oakland a few years later I built a big kiln in my backyard using that book—what was it?

De Staebler:  Daniel Rhodes? I’ve got it on the shelf over here.

RW:  That’s it. If I’d stayed with the pottery, I might have gotten pretty good.

De Staebler:  Well, you know, Hamada said, “It’s taken me only twenty years to master this clay, but that’s only because it was an inferior body.” If it had been a rich kind of clay, it would have taken him longer, see?

De Staebler:  His work doesn’t do much for me, but I like some things he said.

RW:  What do you think of the Yanagi book, The Unknown Craftsman?

De Staebler:  You’ll have to tell me about that.

RW:  He talks about his feeling for the older pottery from Korea and how those utilitarian pots had a pure quality that was free from egotism. You know, Yanagi was a force behind the Mingei movement in Japan.

De Staebler:  I think that was the modern beginning of sensing the richness of clay in its own nature. You don’t have to transform it into something else to find beauty. You have to burn through a lot of pretty work to in order to love the gift of the clay—its randomness, its tendency to crack and warp.

It’s what De Staebler says in those last two sentences (well exemplified in his own work) that I wanted to cite here at the beginning of my thoughts on the work of Danae Mattes. There’s something much akin to the spirit implicit in those words that can be said of her work. Both artists grapple with making visible something true, not just to their personal experience, it goes beyond that to something more objective and impersonal.
In De Staebler’s remarks, “the richness of clay in its own nature,” and the amount of work one has to do in order “to love the gift of clay,” one senses something Zen-like. It’s a rare gift when our screen of thoughts and reactions drops away and we become present to what is. All of us have experienced such moments—perhaps more so as children—and they’ve been forgotten. Works of art that have the power to remind us, even in a whisper, of such moments are hard to find. It’s as if they speak a language we recognize, if only through its absence in our ordinary experience. We’re moved to pause and, for a moment, we’re in touch with something strangely familiar.
In an effort to describe her own work, Mattes writes, “When walking through a landscape, I often find a wonderful mirroring of myself taking place, as if the very act of movement becomes a gateway into perception.” Mattes writes further, “I have come to view my work as a synthesis of the experiences I have when walking through the landscape.” 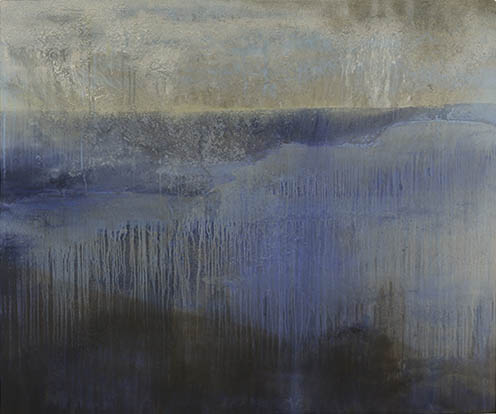 It’s a sentiment that would be easy to pass over. What painter of the landscape doesn’t have a feeling for his or her experience in nature and the wish to capture it in some way? What strikes me about Mattes’ work is how it manages to carry us into larger truths of how nature works. Her chosen materials could hardly be more fundamental: clay, water and pigment. The process of evaporation accounts for much of how the final piece takes form. That such visual images could also be beautiful, allows one to breathe in front of them. As she puts it, “I’m interested in reflecting human experience ‘inside’ the encompassing environment. If I present a landscape, or part of a landscape, I hope to express the fusion of materiality and the inferred sublime. I try to arrive at a sense of place, or space, that has within it a type of poetic clarity which extends perceptive possibilities beyond a rational descriptive.”
What I think Mattes is trying to get at corresponds to experiences I’ve had while alone in nature. After walking quietly for forty-five minutes or an hour, sometimes a shift takes place and, suddenly, I’m present; I’m exactly where I am. To be in touch both with the reality of the earth around one and under one’s feet, and also present in oneself, is an opening into the inexplicable and mysterious. It can’t adequately be put into words. It’s “beyond a rational descriptive.”
Some of us will remember Aldous Huxley’s book, The Doors of Perception. It was important for so many of us who felt the instinctive need to escape from the shallowness of our day-to-day culture. Missing was the kind of direct experience Huxley wrote about under the influence of mescaline. The title of his book is taken from William Blake: “If the doors of perception were cleansed everything would appear to man as it is: infinite. For man has closed himself up ‘til he sees all things thro’ narrow chinks of his cavern.”
Is stepping into the depths here asking too much of Mattes’ work? Perhaps. But it’s where her work takes me. In a recent conversation, she reminisced about a childhood rich in time spent alone walking in woods and along streams. Her memories of those experiences have remained vivid and serve as something like a center of gravity, much like a deep question. Beyond the beauty of this work is an ongoing inquiry into the meaning of that deep experience. It’s a universal question.
Immersion in nature has been a basic condition for humans for most of our existence. In comparison, our contemporary lifestyle is one of profound disconnection from nature and the consequences of this disconnection are becoming more terrifyingly real almost day by day now.
Mattes’ work, and the search it helps us feel, is a quiet way of speaking to our situation. Putting this in words is another matter. In a long conversation with me, Mattes came to a word: reverence. It’s a word that needs some protection or it gets swept along with all the other words. It’s hard to miss that another word is close by: sacred. The work is an invitation to ponder the great mystery of how water and clay are animate in each of us.
Mattes is careful in this realm, and rightly so. What comes to mind is a title she chose as a key to her work: Is this Seeking, or Finding?
May it be both.
For more, visit www.danaemattes.net/