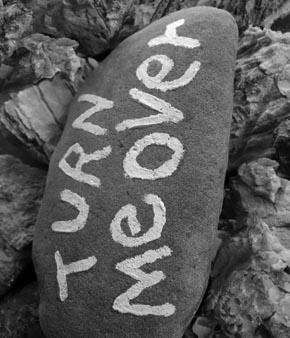 I’d just finished breakfast in Deming New Mexico and was heading back to the Interstate on my way to Baton Rouge when I passed a small sign: “Rockhound State Park.” I was pretty sure that’s what it said. For the next mile or so, as those words settled in, a struggle broke out. Did I really need to rush back onto the Interstate? Not really. So I stopped and turned around. I had to to see if I’d read the sign right. Rockhound State Park. Sure enough. Eight miles.
The phrase vibrated like a string on a banjo. Who could have thought up such a droll twang? And what would a rockhound state park look like? Of course, looking around Deming, you figured there would be plenty of rocks, but wherein would lie its rockhoundularity? Taking flight, my imagination was adrift with no place to land.
Eight miles later I pulled off on a little dirt road and into the park. The grounds were marked out roughly on an open hillside bereft of any foliage. Parking areas were flanked by a few wooden picnic tables.
I can’t claim to be a rock hound, but I’ve picked up my share of rocks and carried them home. I’ve got a few hundred pounds sitting around to keep me company—nice solid pieces of granite, marble, quartz. There’s nothing like the feeling a good rock gives, cupped in the palm of the hand. So when I turned off the engine and surveyed my surroundings, I was prepared to like whatever I found.
There were no trees to cast shadows in the winter light or ease the stiff gusts of wind that rocked my pickup. “Yes. This place has a good look,” I thought—a stripped-down-to-the-bones look. After all, rockhounds wouldn’t be looking for some well-tended lawn with a nice border of hedges, would they? Rocks were the thing, after all. It’s only after the tramping over hill and dale, the digging, the sweating, the chipping, the sawing and grinding, the tumbling and polishing that the magic appears. It's only after some good, honest toil that the agates, geodes, the opal and chalcedony come to life. If it were otherwise every Tom, Dick and Harry would be in on it; it would be just as Yogi Berra said, “Nobody goes there anymore. It’s too popular.”

Coming to a stop in the dirt parking area, I looked around. The only building in sight was a trailer—or two or three of them, connected together somehow. That would be park headquarters, then. About half-way up a concrete ramp leading to the entrance door, stood a dusty table with a pile of the least interesting looking rocks one could ever hope to find. On top was one flattish rock on which someone had painted “turn me over.”
I stopped and looked at it judiciously. I looked at the other rocks, too – some kind of ore, probably. I considered the situation. I did not want to fall prey to someone’s little prank, but still…
Passing up the rock’s invitation, I continued up the ramp towards the door to park headquarters. Once inside, I looked around. No retail. No books, no maps or knick-knacks. This was not a place you were going to see featured with a Park Service brochure. There were a couple of simple chairs and a single telephone sitting on an empty, slightly battered desk. A dilapidated display case stood against one wall. I walked over for a look. Its glass was so dusty I couldn’t make out the labels on the mineral specimens inside.
“Geological,” I thought, approvingly. “Very geological.”
As I stood there, I noticed the muted sound of two voices behind a wall. Rangers? I looked around the room again. No door or opening offered passage in the direction of the voices. Should I? Well, since there were no other options, I knocked on the wall. No response. Okay. Did I really need to find a ranger? What would I say? “Any brochures?” "What kind of rocks are those out on the table? It was a moment empty of any kind of blandishment one might have expected – or even hoped for – a place where the real Indiana Jones might have taken a breather. It was perfect in a way I could not have foreseen. The promise that speaks to the spirit of rockhounds is hidden under plain surfaces and a jacket of dust. Another surprise.

After a few minutes of silence and unexpected presence, I took a last look around and stepped back outside. I headed down the concrete ramp. There was that table with its scatter of rocks again—and that little problem I hadn’t resolved. I stopped to look again at the flat, gray rock sitting on top of the pile … turn me over.
In good faith, I wondered—could there be a geological surprise hidden underneath? Was it a teaching device? Turning it over, would I find some embedded fossil? Crystals? Another part of me, however, was not convinced. I was reluctant to play ball. And yet...

The wind picked up and lifted a sandy cloud in the parking lot. I looked around. Absolutely no one was in sight. I turned back to the rock. Hmm… Once again I looked around. Was there some kind of peep-hole in the trailer where the people connected to the voices could be watching me?
Finally, I reached out and carefully picked up the rock. Slowly, I turned it over.
In some forlorn and distant place, eight miles from Deming New Mexico, one more sucker had bitten the dust.
“Thanks, Babe. I needed that!” said the rock.
“Shit!” I said, involuntarily.
Still with the rock in my hand, and straightening up, I looked around once more. Nobody in sight.
It all fit. Even in the middle of nowhere, people want some connection and a little fun. Even rock hounds. I'd carry the moment with me. Thanks babe.

Richard, I can't imagine that you would ever walk away and not turn that rock over. You are to curious for that. And, you helped create the completion of the connection which, as you say, everyone wants, even in the middle of nowhere.

A Man Impossible to Classify One of my first experiences in San Francisco was of being ... Read More 745722 views

Say Grace I am deeply delighted to live on a planet that is so big and varied that I can ... Read More 10851 views

Cotton and Silk Vorbeck quilt, detail I’m working on the last panel of a pair of ... Read More 12406 views

A Conversation with Silas Hagerty I met Silas, a young man in his twenties from New England, at a ... Read More 78766 views

A Man Impossible to Classify One of my first experiences in San Francisco was of being ... Read More 745722 views

Interview with Bill Douglass—Jimbo's Bop City and Other Tales At the time I'd first gotten to know the widely respected ... Read More 368233 views

Greeting the Light It was thanks to artist Walter Gabrielson that I was able to get ... Read More 310374 views