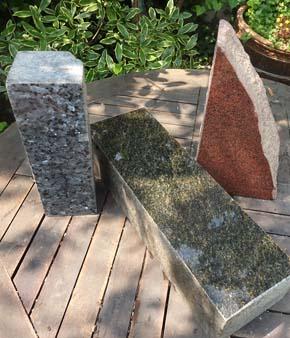 
July 2010
Today I went down to the local gravestone vendor to see if I might pick up some pieces of broken stone. Why wouldn’t scraps accumulate from flaws or mishaps in the ordinary course of cutting and dressing memorial stones? It seemed reasonable to think I’d be able to pick up some nice pieces of marble and granite for next to nothing from such discards. And since Mountain View Cemetery, over a hundred and fifty years old, is not far from my home in Oakland, that’s where I headed.
Soon I was standing in front of a display of headstones that came right up to the edge of the sidewalk. It’s funny how little one can anticipate the experience of taking an often small step into another world. I found myself lost for awhile in this sea of headstones with their graceful designs cut into polished surfaces in bas relief - each waiting only for names and dates to be added. Then pulling myself out of my reverie, I looked around for the place where the actual cutting and polishing is done. Spotting a good candidate, I began threading my way through the headstones towards a simple structure in the distance. As I got nearer, I saw undressed blocks of granite and marble lined up in rows. I could see shades of red, black, gray and brown. Once I was close by, I saw that each piece was polished on one side – probably came that way from a wholesaler, I guessed. The soft, natural red was particularly striking, but each type of stone had its own beauty.
A tall, gray haired man with a pleasant manner approached and asked, “Can I help you?”
“Well,” I said, “I don’t know. I’m just looking for some broken pieces, if you have any. I’m thinking of giving some of them as Christmas presents.” Saying this, I smiled hoping my statement might hit a sweet spot somewhere between whacky and charmingly original.
The man nodded his head as if the idea seemed perfectly ordinary.
“Okay!” I thought to myself, feeling a little surge, “This might work!”
I’d already noticed that not far from where I stood a soft gray piece of granite lay on the ground broken into three pieces. I pointed. “Something like that's what I had in mind.”
He nodded his head noncommittally.
“Where do you get all this wonderful stone?” I asked.
“From all over the world! Actually most of it now comes from India,” he said with a little more feeling.
I shook my head as if to say, “Isn't that something?” followed by, “How do you cut the letters?”
“Sandblasting! We set a rubber template on the stone and sandblast it.”
“No kidding?” This time, I nodded my head thoughtfully up and down.
A little time passed as we stood together in the hazy winter sun. He hadn’t showed his cards yet.
“Well, what do you think?” I asked.
“We have cores,” he said.
“Cores? What do you mean?”
“Here’s one,” he said, picking up a round plug of granite that had been sawed out of a slab. “We cut these out so there’s place where people can place flowers.”
"Flowers? But of course," I thought, absorbing another bit of knowledge about headstones.
“I was thinking of something more like these pieces here,” I said, pointing again to the pieces of broken granite on the ground.
“Okay, Follow me,” he said.
We walked into a large enclosed area passing several large slabs of unfinished stone leaning against a wall.
“Some of those weight five or six hundred pounds,” he said.
We arrived at a spot far in the rear where smaller pieces of granite were stacked, some of them broken.
“We keep these for people who come in and want something for a pet.”
Taking a moment to digest this revelation, I collected myself. “Yes, this is what I’m looking for,” I said, picking up a broken piece of red granite. What would you want for a piece like this?”

And so a modest deal was struck. I went back to my car and brought it up to load my six or seven pieces of granite. Driving home, I was feeling pleased. Most of those pieces of granite are still sitting around. One is on my desk as I write.
Whenever I take the time to look at one and pick it up, the original pleasure returns - the same as always. And I did give one away as a Christmas present. It was a heavy gift, literally - and wrapped, it created a good deal of suspense: what could it be?
That solid piece of granite, its polished side balanced by its broken side, was accepted with surprise and, as I could see, unfeigned appreciation.
But if you think about it, is that so surprising?

Synchronicity! My sister took me to this very cemetery for sketching purposes yesterday 8/21/2021 What a stunning park/cemetery! I love walking in cemeteries and reading the sometimes quirky sayings. For example: husband 1832-1879 fell asleep!

The history of our world is recorded in stone, and that silent story fascinates those who take the time to look. Rock is compelling. As the wife of a geologist I have lived for years with a large collection of rocks, minerals, and a few small boulders that represent finds from my husband's work travels and pleasure hikes. These are not the flashy, sparkling, gem quality rocks that fill expensive galleries. I had to smile when I read that Richard was after granite. My husband is a native Californian and he has a particular love of granites, which form the backbone of the Sierras. Granites have a certain emotional gravitas. We are fragile, and life is short, compared to the geologic time lines of rocks. Granites are hard, they endure, and so are often chosen to represent things we want to be remembered forever, like the name of a loved one on a grave marker.

In the frenzy of moving 4 years ago our rock collection had to be thinned. I had to dispose of the rest. What I thought would be an insurmountable task proved to be a joyous gamble and giveaway. 40 years in one house had resulted in hundreds of big chunky rocks that had been collected and sawed in half, producing specimens with a natural outer surface and a satiny smooth inner face that often revealed surprises hidden in the heart of the rock, its beauty fully revealed when amplified with a splash of water. In desperation I set low bookcases up on my corner, lugged hundreds of rocks, and placed a notice for free rocks on the Nextdoor website. What followed was a mind-boggling flow of excited people from dawn until dusk. People brought their children and grandparents, and called their friends. When my husband was home he would go out and talk to people about the rocks. Every rock had a story and they were hungry to know the geologic and personal history of their rocks. On the evening of the 3rd day a vehicle towing a small open trailer pulled up by the side of the house, and the last of giveaway rocks disappeared into the night before I could even get outside to see them go. I was left with a grateful heart that my burden had been lifted, and in the process of this experiment, we had all experienced joy and curiosity and fellowship around the mystery of rocks.

Oh Richard, you area man after my own heart. I'm infatuated with stone and have displays of pieces everywhere in the house and gardens. I traveled across the country seeing veins of stone and this inspired my novel Founding Stones. The essence of the earth compressed and the essence of an individual compressed with generations stories.. I gift special rocks and stones-- with mixed responses... I chose the recipients carefully. All smiles with your piece.

Responding to dear Gayathri, oh how I hear you on a you write from the poetry and whimsy of Richard's piece to the heavy price our earth pays for our taking from her. Related to this I've never worn or purchased "precious" stones or gold for that very reason. Here's to honoring beauty. And here's to you Richard and connecting with each other, being curious and asking questions.

Dear Richard, I see the poetry in your piece, the beauty and whimsy of having or re-purposing granite head-stone discards, as it were, and having them around so both the polished and broken sides are visible. And I salute and honour that sentiment of wanting to use/re-use things, to not 'waste' something and to see finished and unfinished beauty side by side (as someone who feels very aligned with the concept of a zero-waste and circular economy). However, right from the beginning, and as I read your piece through, the dominant feeling I felt was great sadness. It is true that a lot of granite and marble comes from India, but if you saw how hills and mountains have been defaced here with the mining of this stone, it would break your heart, I think. I've seen some of these granite mining sites in the hills of the Eastern ghats in my home state of Tamil Nadu in India and it is so painful to see the rock face of mountains defaced and blasted -- a gash in stone and earth...I have thought so often that if more folks saw what we are doing to the Earth as we mine and destroy hills, we would not buy granite or marble, or buy much less, or buy with great awareness of the price some beautiful hills have faced for our desire for beauty of this sort...I'm not saying we don't have some granite table tops in our home kitchen. We do, but I will never again buy something in granite or marble unless I absolutely cannot avoid it, for whatever reason. I wanted to name this, and add another dimension to your reflections. I hope it is not amiss here...

Richard, your "small step into another world" is a story that holds so many possibilities, some of which depended on the person you found there among those stones. I can't help but wonder what he thought when he heard your request and your plan to give them as Christmas gifts~~surely not a common request. And certainly not a common gift. Who knows, you may start a whole new trend in gift-giving. I've been given a stone from several persons, bringing them from another country or from another part of our country. Prized gifts, I feel. Your accompanying picture looks a bit like a work of art. So many possibilities!