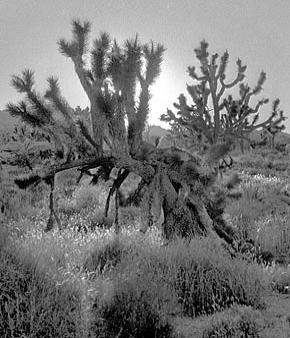 The Mojave Desert is a big place. In 1994 a small part of it, over two thousand square miles, was set aside as the East Mojave National Preserve. I spent a few days and nights with my wife camping in that preserve and just walking around. There are more wonders out there than you’d ever think.
From San Francisco, I’d driven down to the college town of Claremont, thirty miles east of LA to visit my mother. It was a short drive from there to connect with highway 15, which passes along the northern boundary of the Mojave Preserve on its way to Las Vegas and beyond. Out there in the desert, it was a strange sight seeing a river of cars tracing a line through that empty, open expanse.
I’d been a particle in that river until I pulled off the highway onto a deserted road running south. Having left that pilgrimage to those temples of illusion, before going far, I pulled over and got out of my car. In the silence, I was suddenly aware of myself in the stillness. The floor of the desert stretched out in a wide swale with a tiny ribbon of cars disappearing in the distance. It was as if I was being given back to myself in that silence.
I’d left it for the love of the desert and its Joshua trees. The road I’d stopped on traced its way across a geological formation called the Cima Dome, a gentle upwelling of granite some fifty miles across and, according to what I’d read, home to the world's largest forest of Joshua trees. The largest! The description charged my imagination, but one can imagine a forest with aspens, pines, maples, redwoods, or other familiar trees. What about Joshua trees? They’re irresistibly exotic, but hard to imagine as a forest. What would I find?

It had taken me years to begin appreciating the desert. When I’d first seen the Mojave it was as a kid who had grown up in the lush mountains of Appalachia. My family had moved west, driving West on route 66 with thousands of others mesmerized by the dream of the angels—Los Angeles—and Southern California. As we drove through Barstow, baking under a desert sun in mid-August and about eighty miles from our new home, I wondered what kind of hell we were headed for. That was a long time ago, 1955.
More than fifty years later, I’d long since experienced many examples of the desert’s incomparable beauty and expected more. According to our map of the Mojave National Preserve, park headquarters were located in Kelso. As we arrived at the abandoned rail depot in Kelso the sun was dropping toward the horizon. No headquarters could be found and, because our map of the preserve was sketchy, I suddenly felt some anxiety. I’d be obliged count on my instincts to find a campsite somewhere along ten or twenty miles of dirt roads. Making my best guess while a little light remained, I turned off onto an unmarked track. As the light disappeared, the constant bouncing from ruts and exposed rocks threatened to shake the knobs off the dashboard, and while scanning what little I could see of the passing landscape, an increasingly heated debate broke out between my wife and I about what to do.
Soon complete darkness had fallen, and trying to keep my anxiety at bay feeling lost in a far-off desert place, we jolted along. With no guarantee of protection against imagined psychopaths with assault rifles - possibly 4x4 truckloads of them - and facing, at best a sleepless night in cold, miserable conditions, a small reflection was finally caught in the truck’s headlights.
A half hour later a flashlight would have revealed me hammering stakes and putting up a tent, my wife and I the lone campers at the Mid Hills Campground. Still, later on, at about 3 a.m. no one saw me as I stuck my head out of the tent under a sky unlike any I'd ever seen. From horizon to horizon, I saw a bright vault of countless small clouds illuminated by a full moon directly overhead. Whatever the words for that moment might be, I can’t find them.

Death Valley alone, part of the Mojave Desert, covers 5270 square miles. (It was made a national park in 1994, the same year the Mojave National Preserve was created. Combined, the two account for less than 20% of the greater Mojave Desert.) Over the years, I’ve thought about the name of that dramatic landscape known as Death Valley. Its name has probably attracted more visitors than those it’s scared away.
In my own many trips there, I’ve often noticed substantial contingents of Germans. If it was not already so, Antonioni made that stark and beautiful place famous in all over the world in 1970 with his film Zabriski Point. With regard to Zabriski Point itself, were I to script a moment there, it would include a busload of French Existentialists. Disembarking, they would stand beside the bus in a group, while their tour leader reminded them of the absurdity of life, bereft of meaning other than what one made for oneself. He might say: “Now you are here. This place is now part of your life, an authentic encounter written in eternity.”
While today, with all its tourists, having such an experience at Zabriski Point can be a little compromised, the starkly beautiful faces of nature stripped bare in Death Valley is endlessly rich with alternatives. And it’s not always hot in Death Valley. Sometimes it can be the perfect temperature when it's too cold everywhere else. And the elevation, ranging from 282 feet below sea level to 11,049 feet at Telescope Peak in the Panamint range, offers a range of temperatures. In the winter and spring—up to now, at least—one finds snow on Telescope Peak, and when it’s not too icy to hike to the top, the views are unforgettable.
One day my wife and I had hiked up toward Telescope Peak on a whim. We’d parked our four-wheel drive at the Mahogany Flats trailhead at 8700 ft. It was cool that November day. Broken clouds were blowing eastward and producing a little rain in isolated places. We weren’t dressed for a real climb to the summit and, when we reached a saddle at 9800 feet, a stiff, chilly wind was blowing across the ridge. The peak itself was hidden in clouds and at times a little snow was being carried horizontally through the air. The vast sky was a mixture of open blue with clouds moving east at a good clip. We could look down on the floor of Death Valley below—down at Furnace Creek and Badwater—where the dark shadows of clouds glided silently across the bright salt flats. In this airy world three or four veils of rain were suspended below the clouds, but not reaching to the ground. Turning 180 degrees, we could look west across Panamint Valley to the snowclad peaks of the Sierra Nevadas. In all of this great, shifting pageant, the sunlight played its kaleidoscopic tricks. The earth was showing us one of its countless magical faces.
It's true that if you go out away from the roads in Death Valley at the wrong time, and without preparation, it could be a fatal mistake. In popular imagination, the desert is always a place of pitiless heat—a landscape of mirage, sand dunes and saguaro cactus. Whoever named Death Valley must have been thinking along those lines and not about the startling beauty of the place. If it were not so awkward it could be named the place where essence can be seen and felt.
The desert is like that. It's a place that has been stripped clean, a place where the bones are visible. And while there’s a relative lack of water and leafy plants, one spring day in another part of the Mojave Desert, my wife and I found ourselves walking in a landscape so dense with flowers that in places we could not walk without stepping on a carpet of blossoms.

Quite a few years ago, my wife and I went to Tucson. It was February. She had a conference to attend, and that left me free to wander in the surrounding Sonoran desert. There, it’s easy to find yourself surrounded with saguaros—the cacti with their arms reaching out and up and favored by cartoonists. Many other kinds of cactus can be seen there, as well: ocotillo, organpipe, several varieties of cholla and prickly pear, barrel cactus and others.
Surprisingly, it had been raining off and on for several days, so much so that there had been minor incidents of flooding. So that first morning, when my wife headed for a conference room, I headed out into the desert. The sky was full of clouds with the sun breaking through in patches. As I drove along, I looked for a deserted road leading off into the desert to call my name. Away from any sign of people, it wasn't long before I found one and followed it until coming to a place that called for stopping—a landscape of bare rock, palo verde, mesquite and saguaro.
There is something so clean and spare about the desert. In the sky overhead, the clouds and sun were taking turns with the light. I got out of my car and started walking, taking in everything around me.
Not far in the distance lay sandy-colored, rocky ridges and hills. As I walked along I felt the stillness of the place. Coming around an outcropping of stone, and walking down a slope, I came to the rarest of sights in the desert, a flowing stream.
It was so unexpected.
In the desert a stream might last only for a few days. I walked to its edge and wondered if I wanted to cross it, my hesitation showing how little I’d left the city behind. I didn't want to take my shoes and socks off.
It’s funny how willing one is to abide with such trivial concerns. I wasn't used to walking barefoot, I told myself. And so I stood there. Then another voice appeared: could I really pass this up?
I stepped into that desert stream, as pure and clear as any stream I'd ever seen. The only person within miles, I joined that space and was bathed in its innocence and beauty. As I stood there in that stream, slowly being opened, I didn't ever want to leave.