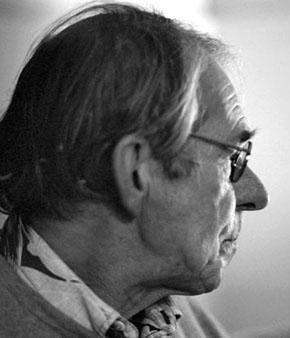 The first story by Ron Hobbs I published was “The Father of Fifties” in 1992. “Bayou Teche” followed in 1993. Each appeared in The Secret Alameda. After TSA became works & conversations, eleven more of Ron’s stories appeared. It’s a bittersweet consolation having provided an accessible place for this writer’s revelations. Ronald was a poet with that rare gift of opening doors to living moments. From “The Poem that Lovers Seek,” he writes: “It’s too easy to say just be yourself. People who play that rusty old saw are just the organ-grinder’s monkeys. Sixty years isn’t spit when it comes to being one’s self. But there are other people who invoke that dictum with deep sense and genuine feeling.”
He knew whereof he spoke.
Wanting to write something in memoriam, I opened a folder with material accumulated over thirty years. By chance, the very first piece I looked at was something he’d written in memory of his mother’s passing.** “How uncanny,” I thought.
In 2004, in a recorded conversation, Ron spoke about the role of women in his life. “My grandmother read the Bible aloud. Maybe I was five. She would read the psalms which, in the King James Version, are just extraordinarily beautifully constructed. Then the stories the children loved to hear, the Bible stories—she would read those, too. And I loved it!
“My father had deserted my mother. So my mother raised me and took in her mother, and her two sisters. They bought a house and moved up to southern Illinois from Tennessee where I’d lived as a small boy. My mother had a job. So grandma was the surrogate, and while my mother worked, she ran the house. And two of my aunts, only six and eight years older than I, grew up in the same house. So it was a matriarchal society. There was only 19 years difference between me and my mother; and between her and her mother there was only 19 years.”
I’d like to think that Ron’s extraordinary sensibility owes a great deal to having grown up in a “matriarchal society.” It’s echoed in all his writings and must account for something distinct and rich, of which we get the most penetrating glimpses.
Having read so many of his exotic tales, I longed to hear an account of the places, the people, the wheres and whens. To most of my inquiries, he demurred. In the stories some things are crafted in the creative spirit, he allowed, but all the stories are true. To tell the truth flat-footed—as I was meant to understand—would be to leave out an essence at the center of each one.
He did agree to an interview, however, from which I’ve already quoted. It’s wonderfully revealing. Here’s another excerpt: (for context: from 1966-67 I’d run a little poetry program in a Presbyterian Church in the Haight-Ashbury District in San Francisco.)

RW:  If the poet becomes who he is, then he can teach just by his being. But if not, we just get words and the poet is a windbag....

Ron:  Oh “windbag” is a lovely word for that! And some are talented windbags. I think a lot of gas is passed from both ends—from young poets, especially— at least in my case. I was important in my own eyes.

RW:  Well, youth is permitted, I guess. I’m thinking of this phrase from Heidegger: “Poetically man dwells.” Now dwelling is actually something to be attained. I wonder if the poet is the one who can dwell? Does this spark any thoughts?

Ron:  Well let me tell you something you don’t know. I know you’re quoting from Poetry, Language, Thought. It was translated by professor Albert Hofstadter at UC Santa Cruz, I think. When I first read that, I ran to the telephone and called professor Hofstadter.
His wife said, “He’s having lunch.”
I said, “I don’t care. I don’t have much time.”
So he came to the phone, and I made love to the man over the phone. I said, “This is the most beautiful rendering I have ever read! The very sense of it just leapt out at me and there was this big Yes!’”

After our interview, Ron sent me a note and quoted Heidegger: “Here’s a gem: If Being is what is unique to beings, by what can Being still be surpassed? Only by itself, only by its own, and indeed by expressly entering into its own.”
With typical self-effacement, he added “It’s a challenge having been born slow-witted. There is just so much wonder everywhere! But the capable intellects are so frequently otherwise engaged that the tasks of understanding fall to the emotional types whose interiors and exteriors are often in disarray, and whose minds are not so well prepared to articulate even simple truths. I understand now, a little bit, when I read at the bottom of a letter, ‘Your humble servant.’”
Ron Hobbs was not the first truly gifted poet/writer/artist I’d met who never found the recognition merited. No doubt a lot of artists feel this way. But the few I’ve met who really stood out were uniquely themselves in a way that was unmistakable.
Playing a small role in giving such individuals recognition in the pages of this magazine has been one of the great joys of my publishing life. And with Ron, it was more than that. He was a friend, and he enriched my life. He had a circle of close friends, all of whom recognized his gifts - and were a source of sustenance. And, as with all real friends, it flowed in both directions.
Thanks to this group, a small collection of his writings is now available: Nearing A Place Called Home. It was edited and compiled by Isaiah Dufort. If the piece of Ron’s writing included here, speaks to you, do order a copy.*

*Hardcovers of Nearing A Place Called Home can be purchased at ronaldhobbswriting.com. A paperback edition is also available through Amazon.

We could hear the singing from the parking lot as we crunched through the gravel, as we passed the cracked pipes, broken valves, defunct carburetors and the busted hoses not connected at either end - and dog mess nearly wherever we might step. A one-room shed sat, propped up on cinder blocks, timbers and jacks, on a raw piece of land where nothing could grow except mosquitoes, chiggers and weeds. Between this slum of burnt-out tractors and fried toasters with their cords squished in mud, stood The House of God!
Miss Felton with her short, fat fingers and broad, squat ass sprawled over the round mahogany swiveled stool on wheels, plinked the keys on the old rinky-tink piano and belted in at chorus with the congregation, “Then go!.. Then go! ... to the House of the Lord!”
And when we entered - my mother, grandmother and I - we took the seats we could find. They found folding chairs near the front and I sat on an old trunk near the door next to a kid who was more fascinated by whatever his finger could pull out of his nose than the singing.
Old Brother Wolf began to preach everything from Daniel to Revelation, his pasty face sometimes, sometimes, melting between the sin and damnation and lighting up between redemption and salvation.
Then the prophesying began: “Behold! A great and marvelous work is about to be revealed unto the children of men! Your young men shall dream dreams! And your old men shall have visions! And I, who am your Father, is the author of it all!”
I wasn’t thinking about the boogers anymore, or the dog shit. My mind was actually upon The Lord of Creation, his sad and valiant emissaries like pale old Brother Wolf and fat-assed Miss Felton, and forty-two simple people who came together in a salt flat to pray the best way they knew how in a shed propped up on blocks and jacks.
Hell, I was only a kid. I was glad. My heart rejoiced! It was an opening to something… I knew not what it was, or where it might lead, but I rushed through the gate!
So, today, when I speak thru the ages to my mother and my grandmother, I use the familiar tongue that they will understand best: “We will be together soon. And I will sit with you in heaven’s silver, folding chairs.”  ∆

Richard Whittaker is the founding editor of works &conversations and West Coast editor of Parabola magazine.