To Savor and Be Savored 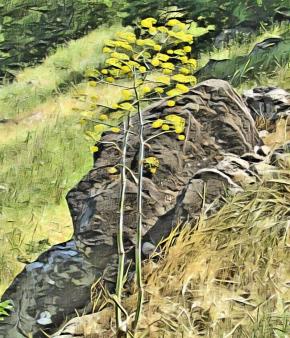 First a riddle:
One of those beings whom it is difficult to describe pleasantly.  Overpowering, off-putting, unshapely. And yet… And yet in the right context, with the right collaborators, her essence transmutes her edges into something altogether irreplaceable. She softens into subtle appreciation, imbues her community with richness and depth, and vanishes entirely in the process. Closely examined, her powers are mystical, even saintly.

Next a clue:
She’s believed to have traveled across the Hindu Kush with Alexander’s army. Long after the would-be conquerors turned to dust, she remained in India, having vanquished the subcontinent without raising a finger.

[Remember: To be mighty is not the same thing as to be long-lived.]

Her perpetuity has something to do perhaps, with her gift of elevating all around her. Her talent for punching up the bland existence of others. Her wisdom lies in knowing that life aspires to savor and be savored. Her greatness lies in devoting herself unreservedly to this warm-blooded dream.

Now the answer:
She is asafoetida.

A speculation:
Unbeautiful and deeply desired, her strange charisma is such that you will find her written into ancient scriptures, praised for the medicine of her presence, admired for her virtues, invited into every home– but left out of almost all poetry.

Not everything that delights us is deemed lyrical. Some entities travel on bright limbs and lithe syllables - like hummingbirds, sunflowers, saffron and starlight. Ravens and raindrops, driftwood, and snail shells. Tumbleweed, tidepools, barnacles and temple bells.

They find their way into poems with the ease of an otter slipping into its river. Other beings are more burdened, in that their selves and syllables do not lilt. They lumber. They are not the sort to ripple or reverberate, rather they lie athwart, like a boulder on a narrow mountain pass. Interrupting the flow of traffic and thoughts, of rhythm and rhyme.

This does not empty them of poetic possibility. Not at all! But not everyone recognizes this. Perhaps this is why poems about asafoetida are few and far between.

A lesson in language
We humans are a fickle lot, fueled by a potent mixture of ignorance, enthusiasm, arrogance and grace. We make up our minds – but our minds are so very different. Contradictions are bound to abound.

In bygone days asafoetida was called Food of the Gods by the Persians. Today the French, Turks, Germans and others call her some version of... Devil’s Dung. Celestial seasoning to some, an utter abomination to others. This is not a problem, but a paradox. They are not the same thing. Sometimes what is lost in translation is subtle and wafting, like a nuance. Sometimes it is teeming and weighty – like a world.

The anatomy of a spice
No matter the name it is assigned, this noxious spice is derived from Ferula asafoetida, a perennial herb with lacy green leaves that grows to nearly seven feet. Every part of this plant exudes a fetid scent. The roots of this plant contain a milky sap. Cut the stalk close to the ground before flowering season, and the sap will dry into an odorous, plentiful resin–as much as two pounds of resin in three months. This reeking resin, long out of daily use in its countries of origin, ignored by much of the rest of the world, is a prized spice in India.

To the native nose, a single whiff is enough to be unmistakable. This malodorous spice disappears into Indian delicacies and everyday fare alike, where it miraculously tempers itself, and all things alongside it into a difficult-to-describe form of deliciousness. If you think of asafoetida as an Indian spice, you would be both right and wrong.

The country that accounts for an estimated 40% of the global consumption of asafoetida, imports it from the mountains of Iran and Afghanistan (more than 12,000 tons a year.) To be native to a place is nice, but one does not become a celebrity by staying at home. Every spice knows, to be properly feted, one must venture abroad. And so it is with this strangest and smelliest of spices. There is in this fact, odd comfort to be had.

The takeaway (that is also the giveback):
Maybe asafoetida reminds us that there is place in this world for every eccentricity– including our own. Reminds us that every obnoxious tendency we encounter is also a potent gift, awaiting the hot oil of life’s frying pan. Maybe we too are destined to spill our singular flavor into everything– and vanish without a trace.

Pavithra Mehta is a writer and poet, coordinator of DailyGood, and a contributing editor for works & conversations.

Having a bag of sought after asafoetida in my freezer (well wrapped so its scent does not infuse the other contents of the freezer), I so appreciate everything about this, especially the part about "with the right collaborators" she adds "richness and depth" to all around her. Such a beautifully poetic life lesson from a humble celestial spice. Thank you!