With Lanterns on Their Heads Radiating Light and Warmth: Rudolf Steiner’s Blackboard Drawings: A Short Tale Close to a Lengthy Subject 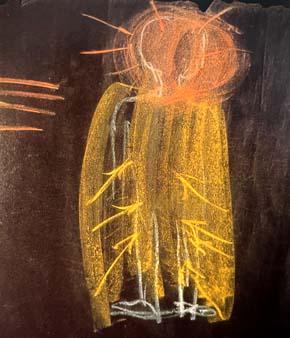 It was Saturday evening, Halloween. We’d made it out of the door with hardly any goblin treats left and were on our way to a Japanese restaurant and afterwards, a movie. My wife had mentioned, “Les Yeux Sans Visage was showing at Berkeley's Pacific Film Archive.”
“What?”
“It’s a 50s, French horror movie,” she’d explained.
After finishing our shioyake, we headed for the PFA - beloved of cinephiles. Back on the freeway we found ourselves stuck in a line of ruby taillights. Nothing was moving.
“Where the hell did all these cars come from?” I exclaimed indignantly.
“It’s Halloween,” my wife reminded me. “People are going to parties.”
“Oh, right.”
And, for some reason, just at that moment I remembered the Rudolf Steiner exhibit at the University Art Museum. Earlier, I’d been thinking about it. This off-beat, esoteric material simply begged for an response from The Secret Alameda, a little art magazine I’d started out of the blue three years earlier. And as suddenly as all this had crossed my mind, I knew it would be perfect for Kathleen Cramer.
“Guess what,” I said to my wife, “I just thought of someone for the Steiner exhibit. Kathleen. She can’t refuse.”
“You think so?” says my wife.
“Absolutely! Kathleen says Steiner invented a device that makes water run uphill! And her son went to a Waldorf school!”
“And we’ll be seeing her tomorrow night,” my wife reminded me.
“That’s right,” I thought. “Holy Mackerel!"
Two nights in a row at the Pacific Film Archives. It would be a personal first - the sort of thing that could mark a turning point in one’s life.
“What’s the movie we’ll be seeing tomorrow?”
“Celine and Julie Go Boating.” It’s nouvelle vague.”
“VOG?” I expostulated belligerently.
“Wave,” says my wife - “v-a-g-u-e.”
“Oh, right. Nouvelle wave. After the movie's over, I’ll launch into the Steiner thing with Kathleen.”
Meanwhile we had Les Yeux Sans Visage dead ahead of us. Now, why were we going to see it? Oh, right. To avoid the Halloween gremlins.
Do I remember a single thing about that movie? No.
So the following night we met Kathleen in the PFA lobby. She was in high spirits. “I’ve just finished my opera!” she said. “Do you like my haircut?”
Rue and I assured her it looked great.
“I told my hairdresser it was his fault I hadn’t been able to finish my opera for twelve years,” she said.
“But you finished it.” I ventured.
“Yes!” said Kathleen, crisply. Then, after a pause, “But I don’t know about the ending. Endings are really hard.”
“I know,” said my wife.
Then we had to hug - Kathleen having finished her opera, and all. And we did.

It turns out that Celine and Julie Go Boating is the longest film ever made - well, maybe not counting a couple by Andy Warhol. Eventually I just let my eyelids close - so nice. I could go to sleep. But no. My father did that in movies, and he died just two years ago. Besides, the tickets cost money. So, I sat up again.
Celine and Julie were sitting together on the big screen just looking out at us in the audience like we were the ones in a movie. This seemed to be the clever meme, trope, subversive device to make us think deeply about ourselves and question what we were doing spending our time watching movies in the first place.
“Is the film-maker ever going to get tired of fucking with us?” I muttered. But eventually, after many hours, Celine and Julie Go Boating came, predictably, to a completely unsatisfactory end.
Afterwards the three of us stood out on Channing Way where I launched into the Steiner proposal.
“Will you?”
“I don’t know,” Kathleen said. “Oh, I couldn’t do that. It would be dangerous.”
“What??”
“Once I said something to—what do you call them, those people who—who, they’re really…
“Breathairians?” I offered.
“Something like that! Well, we were all showgirls. It was in Las Vegas. I said to them, ‘You say it’s real knowledge, but that we have to pay for it. If it’s real, why should we have to pay for it? Real knowledge isn’t something you buy and sell.’ I was young then, you know, and I had this attitude.”
“You're afraid of them?”
“Yesss.” she said. “They’re serious.”
I’ve forgotten the particulars of the next few minutes as I tried to untangle what she was saying. At each step, I was being led deeper into the woods. What creative genius! I thought. It’s why I knew Kathleen would be the perfect choice to write about Steiner’s drawings.…
It was clear, though, I’d have to write about these drawings myself. It was a let down. But as I stood there with hopes dashed, a new thought suddenly appeared cheering me up a bit. Maybe Dickson (Schneider) would give it a go.
So a few days later, I gave Dickson a call. “I hear you’re going over to the UAM this afternoon.”
“Yeah. Elizabeth asked me to get Neal out of the house. She’s having a surprise birthday party for him. And I’m taking my class over to the exhibit next week [Dickson taught drawing and art history at Cal State East Bay]. I want to see what I’ll be up against.”
“Why don’t I meet you over there?” I said. “I want to see Steiner's blackboard drawings myself.”

At the museum, I finally found Dickson standing in front of some Luc Tuyans drawings. It was 2:15pm. We had about an hour and half to kill before getting Neil back home.
“Anything good?” I asked.
“There’s less than five hours of work here,” Dickson joked. “But I like them.”
As I looked at Tuyans’ drawings, I got the impression they were from his sketchbooks. “Seems like he’s just working on ideas.”
“Yeah. But is that enough for a show?”
We had a little laugh. Dickson's a font of wry humor. “Have you already seen the Steiner drawings?”
“Not yet.”


That evening I thought our museum visit over. Then I wrote a note to Dickson: Let’s try not to take Steiner’s drawings too seriously - like the person who wrote the exhibit essay did. Let’s not pretend they’re the “embodied spirit” or “Truth revealed” or that “we’re shown, again and again, the deeper Truths made visual even as Steiner spoke.” And let’s not repeat that stupid quote someone else made - “Even Joseph Beuys only had the skill to use one color, white.” I mean, let’s not make fools of ourselves.
Let’s just say, “These drawings are refreshing.” And we can add, “It’s refreshing to see them in a fashionable contemporary art museum, where the chances are good that the work being exhibited isn't refreshing or even very interesting." What would you think about that?
I must not have sent my note to Dickson, because nothing ever appeared about that exhibit in TSA. Too bad. It could have been a great fit. We loved stuff like that. 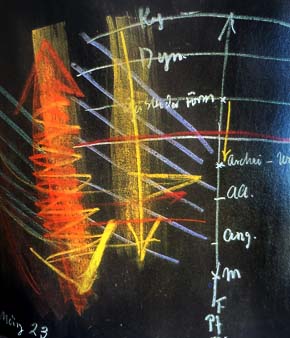