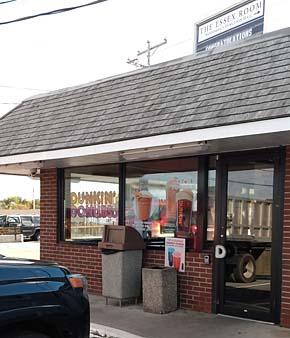 This is actually happening…

Some time ago, I began to work with these four words as a reminder to help me return to the present moment. It became a mantra inviting me to be present to myself and to whatever was happening.
After I retired from my corporate work, I was able to spend more time with animals, especially my dogs, but other animals as well. One of the things I explored and became involved with is dog massage. And one warm, October day on my way to do a dog massage 25 minutes from my house, the idea popped into my head to stop at the Dunkin Donuts in Essex to get a hot chocolate with whipped cream.
This was odd because it was rather hot outside. I hadn’t been in that DD for years, and I very rarely order a hot chocolate. I tried to let the thought go, but oddly it persisted and focusing on the whipped cream.
Well, why not then? I gave in to the thought and ten minutes later pulled up at the little Dunkin Donuts in Essex. There was just one person in the place, a woman, and she was holding a large iced tea drink. “Are you in line?” I asked
She pointed to the counter. No one was behind it.
“Do you know what’s going on?” I asked.
“I’ve yelled out but nobody’s responded.”
“How did you get your drink?”
“Oh, I ordered it online and it was waiting for me when I came in.”
I leaned over the counter to see if anyone was in the small back room. No one. Then, in a loud, friendly voice, I called out, “Helloooo. Anybody home?” Nothing.
We both laughed.
“I’m 75 and this is a first for me”.
“Same here. But I’m only 30.”
“But you already have your drink. Why are you still here?”
“I want to get some whipped cream for my dog waiting in the car.”
And Boom. My mantra kicked in: this is actually happening.
With that, I became more present. I looked at this young woman with fresh eyes. A human being was standing right in front of me. It opened the doors of communication. I told her I was on the way to Manchester to do a dog massage.
She was coming from Manchester and was on her way to take care of some horses in Ipswich. “I started this two years ago and had only planned to muck the stalls for a few months, but now two years have passed.”
“So, would it be safe to say that you’re in transition?”
“Oh yes!”
As we chatted waiting for a Dunkin Donut employee to emerge from somewhere, I discovered her name was Elizabeth, same as our daughter. She had two masters degrees, the most recent focusing on sustainability which she got from a college in England.
“Could you tell me about your dog in the car who likes whipped cream?”
“I actually have two dogs. I got them both from Sweet Paws Rescue”
“Intriguing. My wife and I have four dogs. Three of them are from Sweet Paws.”
We thought about calling the police just in case something had gone wrong, but decided to go on our separate ways. But before leaving, Elizabeth asked, “Would you like to meet my dog in the car? She’s a rambunctious one-year-old. Sometimes she’s afraid of men.”
“OK, let’s give it a try.” Most dogs feel comfy with me since my clothes have the odors of all the dogs I visit, as well as my own dogs.”
At the car, this sweet, one-year old lab mix with shining eyes greeted me tenderly as I let her smell my hands. She invited me to pat her. Then she dived down on the floor and brought up a stick in her mouth. We played together for a bit.
I looked at Elizabeth and said, “I’m a mediator and one of the things I love to do is to accompany people in transition. I don’t charge anything and some people I talk with tell me they find it helpful. That’s more than sufficiently gratifying for me. I gave her one of my dog massage cards with all my contact info.
She asked if I prefer email or phone. “Either is fine,” I said, “whichever you like to get it going.”
Whether she followed up or not didn’t matter. What I do know is that, for the short time we were together, our exchange was a lovely gift for both of us. And it was actually happening.
On my way home, I noticed that the Essex Dunkin Donuts was up and running. Someone was behind the counter and several customers were in the store. I decided not to stop in for the hot chocolate with whipped cream, after all. ∆

David lives with his wife, Catherine, on a small farm in Ipswich, Massachusetts with four dogs, three horses and a gaggle of chickens and ducks. He is a mediator and also does therapeutic dog massage focusing on elderly dogs and hospice work.

I am concerned neither of happy people bothered to check in the back of the store to see if there was a medical emergency as the reason no one came to the counter. Sometimes you have to forego the happiness to see what the reality of the situation is. I sent Email to the author.

Thanks for sharing, David, on our compassion pod site (I wouldn't have seen it otherwise). These types of ripples out into the world are magnificent -- they truly help the world go 'round.