The world is full of restaurants where people come to sit, to enjoy each other’s company, and of course to eat. Karma Kitchen is a little different. As one of the more local projects of ServiceSpace, Karma Kitchen is a restaurant that offers individuals the possibility to be a server one day, and a guest the next. In this radical place, there is more laughing, more cheer, and more spontaneity than in most restaurants. Here one can come alone and leave feeling a part of a big family and an even bigger ideal – to live a life based on the generosity and service to others. - Vlad Moskovski

Vlad:  What is the basic premise behind Karma Kitchen and how is it different from a regular restaurant?

Richard:  Karma Kitchen is an experiment in generosity. At the end of the meal a check is presented saying, "You owe $0.00. Your meal has been paid for by someone who has gone before you. We invite you to pay it forward any way you wish."

On the outside it looks like a regular restaurant, but the atmosphere is friendlier; there’s more human connection in the air and this always leads to an elevated and festive atmosphere. No two Sundays are the same. It’s really quite wonderful. Each week the staff people are all volunteers except the cooks who work for the restaurant and get compensated.

Part of the idea is that it's a special experience for the volunteers. As a volunteer, you’re serving the food, but you're also making a conscious effort to be open to connecting with the people you’re serving - and to anyone in the restaurant, actually. You might learn that someone has just come to town, for instance, or they’re on their way somewhere. Maybe someone wants to sing a song, or an anniversary has just happened. Any number of things that can come to light. If something that would be good to share has been discovered, and the guest is willing, the waiter alerts the maitre d’ who will introduce the guest to whole room. So this is an added dimension where all those who are volunteering are alert to hidden possibilities.

Of course, for the volunteer, there’s also the experience of just trying to meet the basic standards of being a good waiter or dishwasher. It happens that at the restaurant [Taste of Himalayas], which is where Karma Kitchen happens once a week in Berkeley, CA, there’s a man, Juan, who is the most extraordinary dishwasher. One time, as a volunteer, I was washing dishes in the back of the restaurant and muddling along as best I could, spraying them and wrestling them into this old commercial washing machine.

There were two of us and sometimes we’d fall behind. Then Juan would sweep in. We call Juan “the Hurricane” and we'd just get out of his way. Throwing dishes in every direction with a lot racket, but never breaking anything, he’d take care of the whole mess in a few minutes. I'd say he got more done in a few minutes than any six or seven voluteers could. It was truly amazing to watch.

Seeing Juan take care of those dishes showed me how much we miss in this culture by overlooking the maestros who exist in every field of endeavor. We celebrate the maestro who conducts of the great orchestra, but real maestros like Juan rarely, if ever, get celebrated. I was so impressed, I actually watched Juan very carefully. I realized that he'd mastered something to such a degree it deserved a real feeling of respect and honor.

So Karma Kitchen is a place in which one has all kinds of fresh impressions, like my impression of Juan. I think it’s because the basic premise is so unexpected. It’s really an exploration of what happens when you actually try to act from generosity and service.

Vlad:  Why do you think it’s so popular? There is always a line out the door.

Richard:  Well, you go there and it’s really fun. It’s always rewarding. I’ve had many astonishing experiences eating there as a “customer.” The most amazing example was when a stranger sitting across the table from me, Susan Schaller, told me a story I could hardly believe I was hearing. Our conversation had gotten into language and linguistics. It just kept getting more and more interesting and then she told me about a book she'd written A Man Without Words. It's a true story much like the Helen Keller story. Mind blowing, really.

That story is in a class of its own, but there are endless ways that meeting strangers can be interesting and enlivening. So Karma Kitchen's basic premise of generosity leads directly to connection as opposed to how we habitually stay in our own lanes, so to speak - preserving our separateness.

Vlad:  So everything is run by volunteers; what do you think motivates people to volunteer their time on a Sunday afternoon to work in a restaurant serving food and washing dishes? If your wife has been trying to get you to wash dishes for years, and you’ve been resisting and now you’re volunteering to wash dishes, that’s a little strange, isn’t it? [laughs]

Richard:  [laughs] Right. It seems that people are drawn to the possibility of giving something instead of just concentrating on getting something. And those who are familiar with that shift from "me to we" know the special feeling that can happen. The thing about Karma Kitchen is that it’s like a little laboratory where people are experimenting and trying to put something new into action.

I think that’s what draws people. There may be a few who go there just to get a free meal because they don’t have any money. That’s ok, too, because often they end up coming back to volunteer and serve as well. They want to give something back. 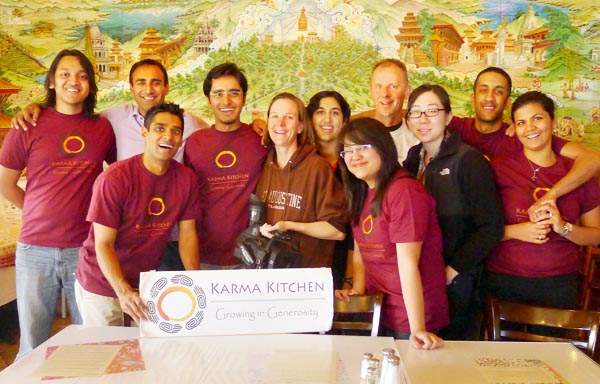 Vlad:  Is the idea of a pay it forward restaurant spreading? I hear about other locations?

Richard:  Karma Kitchen has been giving rise to copies of itself. I think there’s one in DC and one in Chicago now—and another couple are in the process of being born [as of March 2018, there are 26 around the world].

Service Space projects have had a tendency to spread. Karma Kitchen is one of them, and there are several others. I think there’s a widespread interest in service and a feeling among a lot of young people that there has to be a different model apart from the selfish, capitalistic attitude of “I’m going to get mine and the hell with you.” Many people feel very deeply that something has to change, and that this change has to be in the direction of some kind of service to a greater good.

You could say that Service Space projects are experiments in this shift toward service. They’re very much interested in that, in carrying out their experiments without a focus on the bottom line. What will happen when one’s actions are guided by a kind of selfless service, something that’s actually generous?

Vlad:  So, they don’t worry about the bottom line?

Richard:  The truth is that there has to be a certain amount of income or such projects could not continue. Money is not ignored, but there's never any fund raising; that's one of ServiceSpace's fundamental principles. The truth is, though, that Karma Kitchen has been more than supporting itself.

It almost seems as if there’s a law, that if something is given with certain kind of purity, truly generous, it always causes a reaction of gratitude. And when you feel grateful, the impulse is to give back. So the bottom line takes care of itself.

With Karma Kitchen, there’s not going to be a big worry about that. If in fact, people were not paying it forward, it would not continue. I don’t think there’s a commitment in ServiceSpace with their experiments that, “We’ve got to keep this going!” The attitude is “Let’s try this and see what happens.”

There’s a willingness to fail. There are always other experiments one can try.

Vlad:  I ask the question about the bottom line, because I see this transition happening from a more capitalist model, at least around here in the Bay Area, toward something more like a gift economy. Of course it brings up concerns in those who don’t have complete faith in generosity or in this law that you speak of.

Richard:  Yes. You have to verify it. If someone gives something to me, and if it’s a real act of generosity, I know how I feel. I know my response is gratitude. It’s an immediate response. And just as immediately an impulse arises of wanting give back somehow, to reciprocate.

Karma Kitchen has been verifiably functioning for a few years now although it may not in the future. While the core people in ServiceSpace are upbeat and full of hopefulness, they haven’t abandoned their critical judgment. They'­re realistic, but they’re also capable of making these unusual leaps and trying things out. That’s a big thing, you know, trying something instead of just thinking about it.

Vlad:  For me, it really comes down to having faith in something that’s very pure; ServiceSpace is very pure around their intentions.

Richard:  Yes. And that purity is an ideal. In moments one might experience a pure impulse, and the next moment one may say, “Oh, I see how I could benefit from that myself, and then be drawn back in that direction.”

I’m sure we all know moments when something actually pure acts through us, but to think that one can be pure—I’d be suspicious of that. For a lot of ServiceSpace people, Gandhi is the great exemplar. There’s a saying of Gandhi’s that, “If you wait until you are pure before you begin to serve, you will never begin to serve.”

You have to start where you are and then maybe, by following the path of service, you’ll move in the direction of more purity.

Vlad Moskovski has been practicing mindfulness meditation since 2000 and teaching in the Bay Area since 2009. He has taught over 2000 public classes and workshops, having helped thousands discover their full potential. He has taught at Impact Hub, Spirit Rock Meditation Center, Esalen Institute, and Stanford University. He's the author Road to Involution and a yoga teacher. Richard Whittaker is the founding editor of works & conversations and West Coast editor of Parabola magazine.